I must admit that I was not able to catch much of the game last night so my commentary on it is pretty much nil.  What I do have for you is what seems like an annual, "What is Albert doing differently this year so far?" article.  Last year I penned such an article for ESPN Insider.  This year you guys will get the privilege of that article.  The clear irony of the situation is that after deciding to pen this article 10 or so days ago Pujols decided to blow up against the Cubs and 'Stros.  A similar thing happened after I decided to write last years piece (Cardinals and Albert, I'm available to be on the payroll next year if you want me to think of said article in April).  All that aside I thought it still may be interesting and insightful to dig deeper into Albert's year so far using Pitch f/x.  Results after the jump.

Early in the season it appeared that Albert was struggling with the inside pitch; however, lately that no longer feels like it is the case.  Noteworthy in that sentence is that I have no evidence and had to use words like "appeared" and "feels" and any analysis done at those particular instances in time would have been subject to small sample size issues.  I can, though, look at the performance compared to horizontal pitch location for the season as a whole with a little more confidence.  Is the sample still relatively small?  Yes, but there could still be some insights there.  The first graph plots run values per 100 pitches (similar to pitch type linear weights on Fangraphs) versus horizontal location with the data being limited to swings only.  All horizontal location information is presented from the catchers perspective. 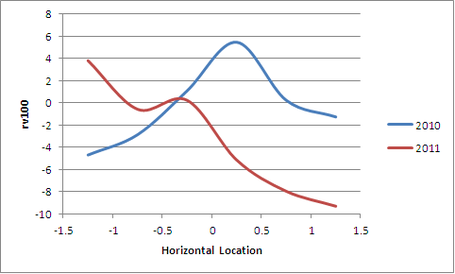 To date performance on swings has been worse across the board, but of special note is the pitches out over the plate.  Another way to look at the same problem is by using wOBACON (wOBA on contact) instead of run values.  That chart looks like 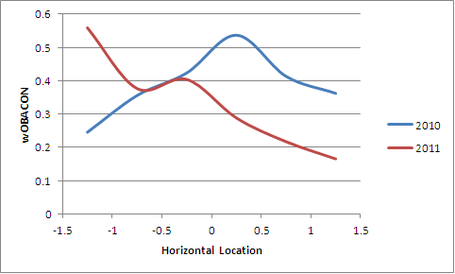 Clearly this chart shows a similar trend.  Both metrics could be misleading since they use actual outcomes and thus have batted ball luck in them.  That said the differences are rather pronounced.  To gain a little more insight we can look at batted ball profiles versus horizontal location over a similar time frame.  The following tables summarize, first 2010

The first thing that jumps out at me is the pronounced increase in ground balls in the "0.25" slice (which is "middle away" in baseball parlance) and the lack of line drives on any pitches away.

What does all of this information mean?  At its core it is just a reporting of what has happened, and is not meant to be a prediction of things to come.  I think Albert will be just fine, and will likely improve his performance on pitches on the outer half of the zone.  Those caveat aside, it still gives us something else to pay attention to as the season rolls on.