who's afraid of ryan franklin?

Share All sharing options for: who's afraid of ryan franklin?

something is wrong with ryan franklin. 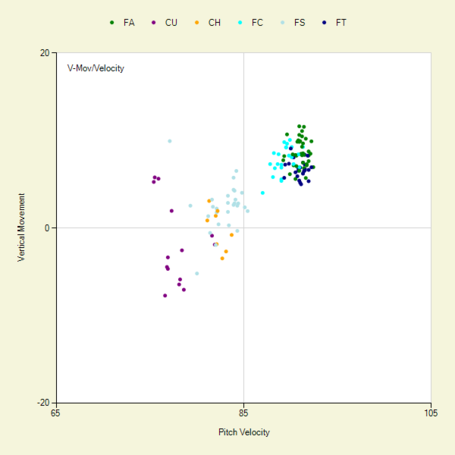 above, see what ryan franklin looks like this year. note the purple dots, in particular. those are his curveballs. more than a couple of his big hits have come on curves that, anecdotally, have been left hanging. there are four curveballs left hanging in the upper left quadrant - that means they are slow, and they don't move much. a good fastball, as you see in the upper right quadrant doesn't drop much, and travels at high speed. a good curve travels slower; what saves it from being a meatball is its movement. curves in the upper left hand quadrant are slow AND they're not moving. three of those purple curves in the upper left quadrant are moving vertically like his fastball - meaning they were just 76-mph "fastballs."

here's the same chart from his whole 2010 season: 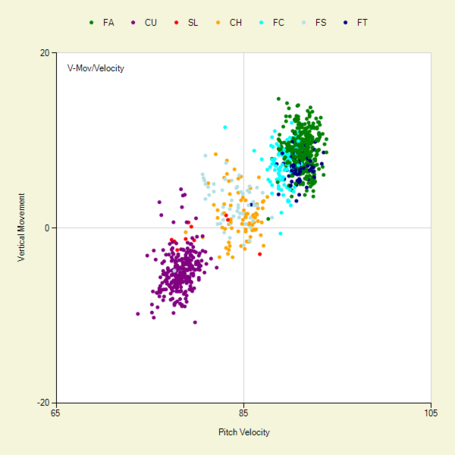 see that almost all of his curves are in the lower right quadrant, meaning they're slow, but drop a great deal. there's only nine "hanging" curveballs in the upper left quadrant over the entire 2010 season. of the four hanging curves in the 2011 chart, three of them are "hung" much worse than ANY of the curves he threw in 2010. so far he's only thrown one-seventh the number of pitches in 2011 as he threw last season, but thrown half the hanging curves.

franklin knows it, too. his curve has stopped curving. last season he threw 29% curveballs; this year, he's down to 9%. and the results have been horrid when he does throw it - his curveball is rated at 28 runs BELOW average for every 100 curveballs he throws. only one person - hisanori takahashi - has thrown at least 10 innings with such terrible results. even though franklin's throwing only one curve for every ten pitches he throws, a third of the hits against him by RHB have come on his curveball.

now, you could easily look at the charts and say, well, we're just talking about a handful of pitches. that's true. on the other hand, his pitch selection is much changed, and he seems to disfavor his curve. that, especially for a pitcher like franklin with no dominating pitch, sets off a bunch of changes elsewhere in his total repertoire. where he doesn't throw a curve, he has to throw a less effective pitch. and the fewer his pitch options are, the more likely batters are to guess what he's throwing, and the easier for them to wait for the pitch they want. his fastball is much less effective this year than last, even though it's movement hasn't changed much.

he's relying far more on his splitter this year - maybe to make up for his vanished curveball. his splitter has made up 24% of his pitches this year, where it was thrown 6% of the time last year. he's also bumped up use of his cutter in 2011 somewhat.

an even better illustration of a better functioning curveball is below: frankie's 2009. 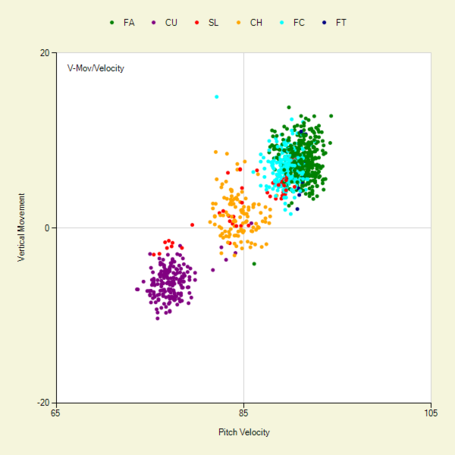 however, you should also remember that franklin's curve was never really good to begin with. an example of a good curveball is shown below - chris carpenter in 2009: 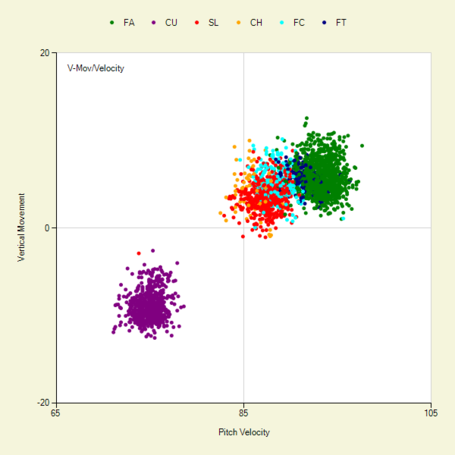 see how tight the grouping is on carpenter's curve, how few curveballs are even CLOSE to the x-axis? franklin has a fair amount of bleed in each season, with lots of curves wandering near that x-axis, because he gets far less drop on his curve. in bad years, franklin's curve crosses the axis into the upper-left quadrant.

maybe a better read on the 2011 and 2010 charts for franklin is that he began to lose control of his curve starting in 2010. that's borne out by reviewing the game by game graphs in reverse chronological order. his curveball isn't dropping at all on 10.1.10; there's a big hanger among some decent curves on 9.29.10; his curveballs are fine on 9.25.10, but there's another hanger on 9.24.10; another one on 9.19.10. the curves look fine again on 9.17.10, then there are THREE in the upper left quadrant on 9.11.10. the only curious thing was that september 2010 was nowhere near the abject disaster that april 2011 has been. his peripherals as well as his results in september 2010 look better than what he had in july and august.

so, that's what we have. from 2008 to august 2010, franklin hangs maybe four curves in that upper left quadrant. in september 2010, he hung seven curves in that top left quadrant. in april 2011, he's got another 4 hanging in that quadrant, and rather flat movement on the remainder.  notwithstanding the decent results he got in september of 2010, it seems to me that hanging 11 curves in two months, relative to four in the previous three seasons, may indicate a problem.

my looks at the season charts for starting pitchers, charts which show NO hanging curves in the upper left quadrant over full seasons of starting make me think there's something to this. the same is true of other non-franklin relievers.

so, what the hell would do this? did he get injured in late 2010? just thinking my layman thoughts aloud, i think of the pulley tendon injury that adam had in 2009. a less acute tendon injury might make the ability to pop those curves inconsistent and might leave some of them hanging. or, he's just a 37-year old pitcher and his body is in decline.

anyway, injury, age, whatever it is -- you don't have to throw a lot of 76 mph "fastballs" with no drop on them to ruin your performance. and as noted before, the batters murdering his curveballs aren't the only problem. the batters murdering his fastball and splitter when he doesn't trust his curve and doesn't have better options are also an issue.

his peripherals are mostly in line with his lifetime numbers, except for three. he's stopped striking people out -- now only 3 k/9; and, 30% of his flyballs are going for HR; last, he has an unlucky 70% LOB rate. the lack of variety in his pitches could relate to the failure to strike guys out. the meatball pitches could account for the extra homers (keep in mind, we're talking about 4 HR so far this season).

or i could be totally misreading his stats and drawing too much of a conclusion from a small sample size. i am nobody's resident pitch f/x guru, but my read on these charts show that franklin - who never had a great curve to start with - has lost control of it. moreover, his inability to make sure his curve actually breaks means that he stops using it and overuses his other pitches. that seems to me to be the best explanation of the on-the-mound conflagration that is ryan franklin so far.