Hey, I wonder what Eduardo Sanchez is trying to do here— 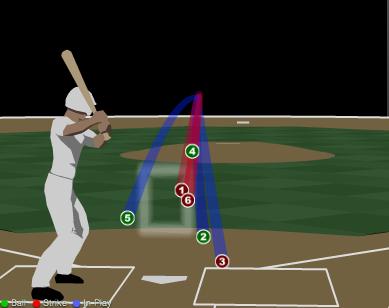 Hm. Maybe we can divine something from the at-bat before that, to Russell Branyan— 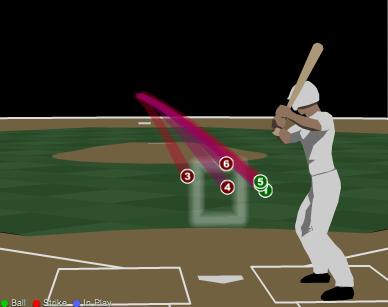 Eventually Eduardo Sanchez will be forced inside the strikezone. That slurvy breaking ball is a vicious pitch, mainly because his fastball is so fast and accurate coming out of what is nothing so much as a slurvy arm angle, but hitters will know it's coming in the future.

But on a blog like this it's easy to sacrifice a little too much in-the-moment enjoyment to the desire to know it'll be replicated in the future. With a closer like the Cardinals currently have it's even easier. Suffice it to say that last night Sanchez knew where he was going with each hitter—either outside or inside—and attacked, even when he fell behind, which was infrequently.

He didn't attack like Jason Motte does, with a fastball like a dare; he attacked the shadowy parts of the strike zone so startlingly that Chris Young swung at a curveball in the dirt, and Russell Branyan waved at a fastball outside after two pitches that missed way inside. Young is prone to curveballs in the dirt, and Branyan prone to waving, but he did it in his first Major League appearance; he did it with a 95 mph fastball that was sometimes mislabeled a cutter.

He was great, and it was exciting to watch. He'll probably be really good in the future, which is its own kind of exciting, and can be broached, maybe, after he's pitched in two games.

Meanwhile: Albert Pujols is making contact at a career-high rate. He's always made contact a lot—85%, against a league average of 80—but he's up to 90 in 2011. Which is a little unfathomable to someone who would need to take a semester off and fill a popcorn tin with batting-cages tokens to make contact on 90% of his slow-pitch softball swings.

In my defense, putting 1.16 of those pitches on the ground for every one I hit in the air would be cause for its own popcorn tin of tokens. That's not quite what Derek Jeter has become in his dotage—since 2005 Jeter has hit 1.48 grounders for every fly ball or line drive, compared to 1.11 before—but it's a complete reversal from the tendencies that led people to cry slump and decline before, the idea that as his fly-ball rate crept up he was becoming a different kind of hitter from the one that's so inimitably complete. (Obligatory 2007 connection—Pujols's last off season saw his highest GB/FB ratio since 2003, when it crept up from its 2006 low of 0.59 to reach 0.75.)

I'm somewhat comforted by the fact that this slump's component parts seem so untenable. Pujols simply won't continue to hit more groundballs than fly balls; there's no reason for him to favor an approach like that, as when Adam Dunn last year suggested he'd become more aggressive and proceeded to cut his on-base percentage by 40 points, and no reason to believe he would.

There's a lot of internal language we can use to describe a slump like this—he's pressing, he's overcompensating, he's worried or fighting it—and no way for me to know what of it's true. It's hard to avoid connecting things like that, given what we spent all of February talking about, so I'm hoping that he takes this opportunity to make the temptation to do that irrelevant. A 2-3 night with a line drive double is a good start.