K-Mac and His Bullpen Replacements

Share All sharing options for: K-Mac and His Bullpen Replacements

First a public service announcement, Tango is running his playing time community projections over at the Book Blog. If you are so inclined head on over and fill it out.

No back to your regularly, errr not regularly I guess, scheduled programing.

There has already been a large amount of ink spilled on Kyle McClellan and his move to the starting rotation. Azru discussed on this very site here, I've dealt with it at GHG here, and my colleague Andy Beard has been keeping a running account of the 5th starter battle over at GHG. That said, I think there's still a little room for discussion on the topic. I'd like to expand on Kyle's repertoire a little bit using pitch fx and see what insights that can give us into his transition. I'd also like to spend a little time on his likely replacements in the bullpen.

As I see it there are a few primary differences between being a starter and a right handed reliever. Clearly the biggest is the need for within outing stamina. One of the parts of stamina is being able maintain velocity from the beginning of a start through many innings. Clearly we don't have any data on how Macs velocity will stand up after 5 or 6 innings but we can still look at how it holds over relief outing in the past 3 years. 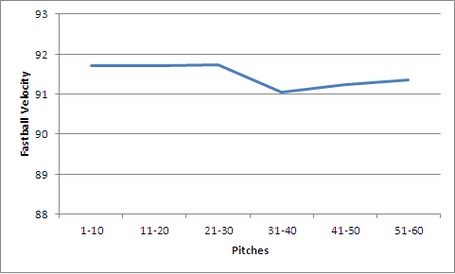 It appears in this limited sample that McClellan has been able to hold his at least up until the 50 to 60 pitch mark.  We will collectively have to keep an eye on him to see how well he can hold his stuff through 80, 90, or 100 pitches.

Another difference Is the need to be able to retire both left and right handed hitters. Azru, in the piece linked above, already demonstrated that McClellan has that ability. Instead of rehashing that information I thought it might be worthwhile to see just how he attacks each handed hitter. The following chart shows the distribution by pitch type against both RHB and LHB.

Clearly McClellan is primarily a three pitch guy, but he does flash the occasional change up (about 10% of the time) to lefties.  Again it is something worth paying attention to, but on the surface it appears that he would have enough weapons to attack both handed hitters.  The following table looks at the success of those pitches using rv100

This table reinforces the idea that the pitches are in fact quality offerings, not just "show me" pitches.  The above two charts also speak to a third skill that starters need when compared to relievers, the need for enough variety to go through an order multiple times.

All of this information points to Kyle at least having a good chance to be a solid starter; which is good seeing as how that's going to be his role.  What about his slot in the bullpen? Looking at the leverage stats at Baseball Reference shows that McClellan had the third most high leverage appearances among RH reliever on the Cards staff last year.  That is the slot the Cardinals are looking to replace, but remember the pitcher that ultimately takes that roster slot may not be the one to inherit the role.  Bullpen chaining says that each pitcher will slot up one and the "new guy" will fall in at the bottom.  Who can slide up into that slot then?  Mitchell Boggs is probably the most likely candidate to replace a good chunk of McClellan's innings.  The one rub is that McClellan was also relied upon to retire LHB in his role in the pen semi frequently.  To date Boggs has not had much luck at the big league level in retiring LHBs albeit in a small sample.  That said he was a starter in a past life, and therefore has plenty of experience against LHBs.  Another option to eventually log some of those innings, Fernando Salas, had a solid K Rate against both LHBs and RHBs in both the big leagues and AAA last season, so he may be a pitcher that can be used in innings with a mix of LHBs and RHBs.

All said, I think there are enough positives in the data to at least see this as a worthwhile endeavor.  Are we sure it is going to work?  Of course not, but it is not a bad option, and probably as good or better than any other the Cards had to fill AW's spot.