Share All sharing options for: head in sand edition

for those of you who are still in Stage 1: Denial of the wainwright grief sequence, the 2011 Maple Street Press Cardinals Annual is a must-read. according to that source, wainwright remains at the core of the st louis rotation. that’s because we sent the files off to the printer on february 4, about three weeks before all this "elbow injury" talk began. if your head’s still buried in the sand and you’re determined to keep it there, then ours is the guide for you. hell, we’ve even got wainwright on the cover.

i suppose that means we’ve got a jinx on our hands --- which is really unfortunate, because chris carpenter’s on the cover of this year’s edition, too. no, really. look: 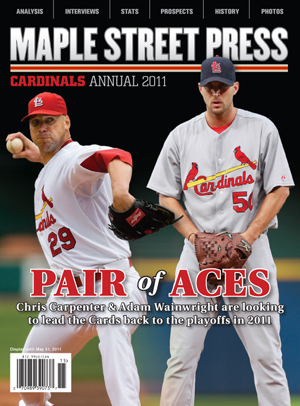 so here's what you do: just fold the cover in half, cut along the crease, and voila! our book is as current as the latest tweet from joe strauss. if you’re handy with photoshop (which i’m not) you can modify the cover to suit your taste (pair of aces: chris carpenter and bryan augenstein!). you could also just tear the damn cover off.

the Annual is scheduled to be on display at your local bookstore / newsstand / convenience store as of today. Danup’s a stalwart contributor as always, along with the red baron, chuck b, will leitch, dayn perry, et alia. the good news is that quite a bit of the material in the book is non-adam-related and therefore retains its integrity. i’m not going to pimp too hard; the list of articles is online at the maple street press website (and you can order yourself a copy there if'n that is how you roll).

if this injury had occurred while we were still working on the magazine, i’d probably have commissioned an article about what happened to other contending teams who were luckless enough to lose an ace pitcher at the start of spring training. only it would have been a short article. i can’t find a single comparable instance within the last 15 years. plenty of contending teams have lost an ace; they’ve nearly all lost an ace at one point or another. but none lost one right at the outset of camp. most of the time, these pitchers go down during the regular season, and the ones who have gotten hurt during training camp got healthy soon enough to give their team 10 or 20 starts. pitchers who came into the season hurt (e.g. tim hudson circa 2009, or pedro martinez circa 2007) don’t make for useful comparisons, because their teams didn’t spend all winter counting on them to contribute. the same goes for guys (e.g. mark prior 2004) who got hurt in training camp but avoided major surgery and were able to pitch at least somewhat effectively that same year; it’s tough to lose an ace for 10 or 20 starts, but still not as tough as losing one for 33 or 34. and then there are cases like daisuke matsuzaka (2009), jason schmidt (2007), and bartolo colon (2006), who began the season hurt, tried to pitch through it, got clobbered, and ended up spending most of a season on the DL anyway.

the closest thing to a helpful precedent out there might be the 1999 cubs, who lost kerry wood on march 17 to a popped elbow ligament; he underwent TJ surgery and missed the whole year. wood had been the cubs’ most valuable pitcher the previous season as a rookie, but i wouldn’t compare him to wainwright in terms of value. he’d barely qualified for the league ERA title the previous year, with 166 innings pitched; that only ranked fourth on his own team. wood’s WAR total (3.7) didn’t rank among the top 10 NL pitchers, nor among the top 20 pitchers in MLB; wainwright by contrast has been in the top 5 in MLB for two years running. so i don’t put great stock in the comparison --- which is convenient, because the cubs fell from 90 wins to 65 and from 2nd place (and a wild-card appearance) to dead last. they gave wood’s starts to kyle farnsworth and andrew lorraine, who went a combined 7-14 with an ERA in the low 5.00s.

the next most useful (or least useless) case study is the 2009 arizona diamondback team, which lost brandon webb for the season on opening day. that team was in a similar position to this year’s cardinal team --- trying to rebound from a disappointing second-place finish and regain the division crown they’d won two years earlier. their rotation was built like the cards’, with a second ace (dan haren) to fall back on when webb went down, two reliable midrotation veterans (doug davis and jon garland) and a talented 24-year-old, max scherzer. haren turned in a stellar year (6.0 WAR, 5th-place finish in the CYA), and the three guys behind him were well above average, combining for 5.3 WAR. 11.3 WAR from the top four starters is pretty good; the cards last year got just shy of 13 WAR from their top four starters (with penny+westbrook counting as the fourth). but the dbacks’ 5th slot killed them --- yusmeiro petit, billy buckner, kevin mulvey, and others combined for 37 sub-replacement-level starts. their bullpen wasn’t every good either. the rotation was still a strength, and the pitching overall didn’t really hurt them ---- the team finished with a park-adjusted ERA+ of 101, about average. by contrast, their offense only finished 8th in the league in scoring despite playing in an emphatically hitter-friendly home park. their final record was 70-92, their pythagorean record 75-87. assume the offense had held up its end and scored 800+ runs; the pythagorean record might have flipped to, say, 84-78 --- at which point the loss of webb would really start to sting, because it cost them about 7 games in the standings. ie, under that set of assumptions webb’s loss would have dropped a 91-win team into the 84-win range --- exactly the sort of outcome the cardinals are trying to avoid.

that brings us to the 2007 cardinals, who lost carpenter on opening day and never recovered from the blow. i’m discounting this one for a couple of reasons. first, the composition of the ’07 rotation couldn’t have been more unlike the ’11 group’s. the ’07 staff featured two pitchers who’d never made a big-league start (wainwright and braden looper), a third with fewer than 100 career innings pitched (anthony reyes), and a fourth who’d spent 3/4 of the preceding season on the dl. this year’s support structure is much sturdier, more like the ’09 dbacks than the ’07 cards. second, when carpenter went down in 2007 the initial prognosis was that he’d only miss five or six starts. he started throwing on the side in late april; when that went badly, they scoped his elbow in early may and pushed his projected return back to the all-star break. carp began throwing again in june, got sent out on a rehab assignment in july, and was expected back in st louis by the end of the month. only after his second rehab start, on or about july 15, did it finally become apparent that he’d have to have TJ surgery. in essence, the team spent nearly four months in hope-and-pray mode, seeking nothing more than stopgap solutions of the randy keisler / brad thompson / mike maroth ilk. all along, carpenter remained the team’s best option to replace carpenter, and he was always thought to be just a matter of weeks away --- so they waited for him to come around, and while they waited the season went into the shitter.

if the 2011 cardinals' season unravels, it won't be on account of might-or-might-nots regarding their ace. they have the luxury of certainty. more important, they have a luxury that no other ace-deprived contending team has enjoyed in recent memory --- a six-week period to restructure their staff. they won’t have to rebuild on the fly. if this had happened at any point during the season, or even late in training camp, kyle mcclellan probably would be ruled out as a replacement. he wouldn’t be conditioned for starting, andhe’d be too deeply implicated in the bullpen usage patterns. if you have to lose an ace pitcher, you might as well lose him at a point when you have more than a month to reshuffle the deck and slot your remaining guys into their new roles.

so there’s your silver lining, folks. don’t be blinded by it.

with respect to the replacement candidates, i think you have to start with mcclellan. he’s the most talented pitcher among the mlb-ready candidates, although his departure leaves the bullpen somewhat exposed. for that reason i wouldn’t be averse to sorting through walters / lynn / augenstein; seems like the odds are good that at least one of those guys can come up and pitch at or above replacement level. but the downside risk would be great --- definite chance of the same sub-replacement results the ’09 diamondbacks got.

thanks for reading. hope you like the MSP Annual in spite of the cover. and if you have any thoughts about the magazine, write me a note.