Someone made a comment in passing about The MV3 (you should always used the capitalized definite article when discussing The MV3) and the current troika of Albert Pujols, Matt Holliday & Lance Berkman. Comparing Albert against himself strikes me as both insane and infinitely regressive (Pujols was better. No, Pujols was better!) but I was curious about Holliday, Berkman, Scott Rolen and the recently retired Jim Edmonds.

Let's take a quick glance at the players by age: 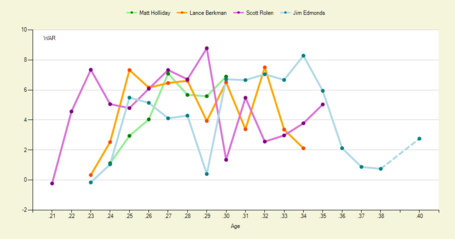 I love graphs like this because they show how volatile player performance can be even for four guys who are borderline or less borderline (HOF #15) cases for the Hall. Scott Rolen accumulated 12 WAR at age 23 before the others had done anything of appreciable value.  If you cherry pick the best seasons from Rolen & Edmonds versus Berkman & Holliday you get 17.1 WAR vs. 14.6. So there's a 2.5 win gap between the pairs with the former both posting 8+ fWAR seasons and the latter never breaking 7.5 fWAR.

In terms of next season, well with Jimmy retiring, it's pretty hard to make a case for R&E over B&H. That said, here's a rough WAR guess for 2011.

Giving them all equal playing time probably over estimates both Berkman and Edmonds but it works for comparison purposes. Turns out position and fielding matter, eh?

Here's another fun chart showing their WAR accumulated over time: 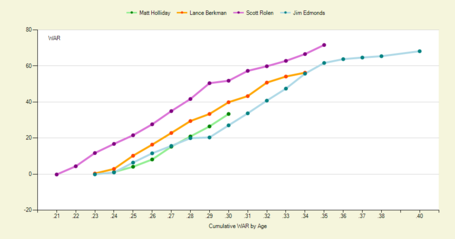 It's pretty clear that if you're going to make a case for Edmonds, you have to be willing to do the same thing for Rolen. If Rolen calls it quits tomorrow, those two have basically the same value over the course of their career although Edmonds has a more defined peak period.

The other thing that sticks out is that Matt Holliday is pretty freaking good. While I think the odds are against him being a HOF, he compares pretty well to Jim Edmonds. But Matt Holliday is just now encountering Edmonds' peak years meaning Matt needs to put up 5 MORE 6-7 WAR seasons to keep pace with Jimmy. I guess we'll at least have the opportunity to see if Holliday can do that in St. Louis.

And finally, because I just can't help myself: 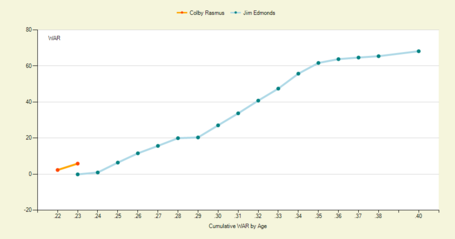 It's a good start. Just another 17 years or so to go. I hope they're all in Cardinal Red as well.