Cardinals vs. Phillies NLDS Game 3: Duel of the Southpaws

Share All sharing options for: Cardinals vs. Phillies NLDS Game 3: Duel of the Southpaws

The NLDS comes to St. Louis for the first time since 2009 and like that year's division series the Cardinals will play host to a Game 3. Tuesday's game will feature a compelling matchup of young southpaws. Cole Hamels will start for the Phillies and Jaime Garcia will get take the hill for the Cardinals. 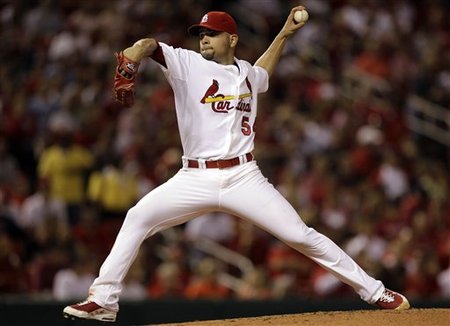 The decision to start Garcia at home in Game 3 is an understandable one. Garcia has a 2.55 ERA in 99.0 IP at Busch Stadium this season and a 4.61 ERA in his 95.2 IP as a visiting pitcher. The home/road FIP and xFIP differentials are nowhere near as pronounced as with his ERA. His home FIP is 3.10; his road FIP, 3.30. His home xFIP of 3.34 is actually lower than his road xFIP, which is 3.29. This is not that surprising. Garcia's road K/9 of 7.53 is higher than his home K/9 of 6.91 while his BB/9 rate does not fluctuate from home to road venue. The difference is in the quality of contact.

In short, in the year 2011 it is a good thing for the Cardinals to have Garcia starting at Busch Stadium in what feels like the club's 100th must-win game in the last six weeks. The key for Garcia in Game 3 will be his ability to strand Phillies on the basepaths. In his rookie season Garcia had a 75.9% LOB rate; in 2011, it has fallen to 66.8%. If Garcia can find a way out of jams, the Cardinals will be in good shape. 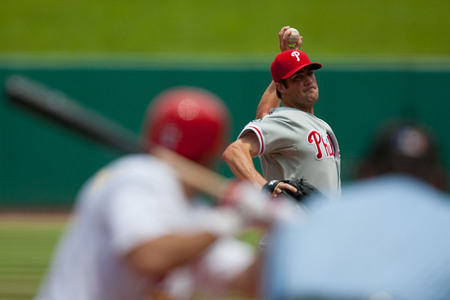 When a club has the likes of Roy Halladay and Cliff Lee in its rotation it affords it the luxury of waiting to start a pitcher like Cole Hamels until Game 3 of a playoff series. Hamels posted an ERA of 2.79, FIP of 3.03, and xFIP of 3.31. While each is third-best amongst the Phillies' starting rotation each would rank first (with a three-way tie in xFIP) if he were a St. Louis Cardinal.

Like Halladay and Lee, Hamels is stingy in issuing free passes to the opposition. It is yet another example of how truly great the Philadelphia staff is that Hamels's 1.86 walk rate is third-best on his team. Combine this with an 8.08 K/9 and you get a 5.0-WAR starter.

The pitching matchup slated for Game 3 of the NLDS is the kind of October matchup for which baseball fans tune in. This duel of the southpaws is a fitting one for this pivotal game in a series defined by excellent pitching.