Share All sharing options for: Cards Starters and Velocity

We have all become accustomed to the Cardinal's pitching philosophy of ground ball inducing fastballs.   In that context, velocity would seem to take a backseat to both movement (preferably down) and location (also down).  This thought is backed up somewhat by the data as the Cards starters ranked in the middle of the pack in both 2010and 2009 in average fastball velocity.  Despite those facts, I was curious to see what kind of impact velocity has on the Cards starting pitchers.  Mike Fast showed that in a general sense that increased velocity means increased effectiveness; however, how that results applies to individual pitchers is a separate question.  In order to answer it I'm going to look at a couple of different things

The following chart plots the rv100 (for these charts negative = good) vs velocity for the starting 5.  All stats in the rest of the post are from 2008-2010 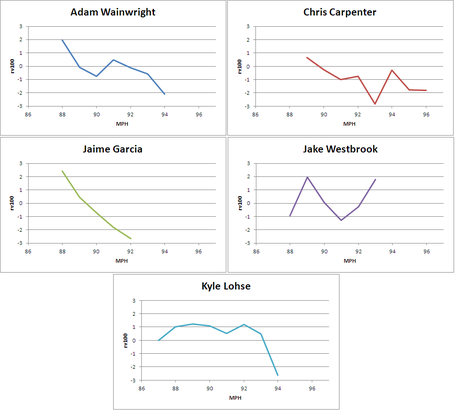 The downward trend of most (Westbrook is the obvious exception) of the graphs suggest that the Cards starter's fastballs are more effective at a higher velocity.  To get an aggregate view I normalized each starters fastballs so that I could coherently put them on the same axis.   I found where each fastball fell on the individual pitchers velocity curve (which are normal-ish) and aggregated the resulting percentiles across the group..  The following chart is the result 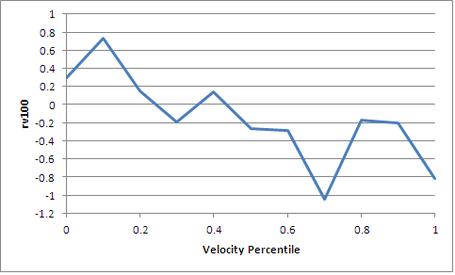 The aggregate view also suggests a downward trend as pitchers increase their velocity.

Both of these charts only speak to the "value" of the individual fastball themselves though.  There isn't any information on how that pitch affects others.  In order to gain some insight into that I compared the hitter's wOBA in at bats where the pitcher's fastball touched at least 1 standard deviation above his average with those in which he did not touch that velocity.  The following table summarizes the results

It seems that hitting a higher velocity somewhere in the at-bat generally has a beneficial impact on the at-bat as a whole.  Also of note, Adam Wainwright and Jaime Garcia are really good independent of velocity, but those numbers when they hit at least +1 SD somewhere in the at-bat are ridiculous.  On the whole it appears that even a staff built on fastball location and movement benefits when they amp it up a little and get some extra mph's, both with respect to the individual pitch itself and the at-bat as a whole.