Slaughter-ing the Myth of Clutch

Share All sharing options for: Slaughter-ing the Myth of Clutch

Last Monday, in "What a Difference a Year Makes (in Run Distribution)," we took a look at why the 2010 Cardinals ball club wound up with only 86 team wins despite having a Pythagorean Record of 91-71, which was the exact same Pythagorean Record and actual record of the 2009 incarnation of the Cardinals. It was meant more to look at the 2009 and 2010 seasons in hindsight than to predict what 2011 may hold.* In the discussion thread, a critique of the concept of a Pythagorean Record evolved into a discussion of clutch performance. This discussion reminded me of a photo I snapped at Busch Stadium last season.

*After our discussion here last Monday, over at the newly reminted Gashouse Graphs, sometime VEB contributor and fellow Cardinals blogger, Steve Sommer, takes a look at the historical correlation between Pythagorean Record and the next season's performance in the wonderfully titled, "The Cardinals and Pythagoras" and "Cardinals and Pythagoras Pt. 2."

I often visit the statues when I make it down to Busch Stadium, usually when I am waiting for the gates to open for batting practice. I look at the statutes themselves, read, and re-read their plaques, and think about the rich history of the franchise. Last year, I read the plaque at the base of Enos Slaughter's statue, and it made me want to dig a bit deeper into its assertions. With a FanPost that never materialized in mind, I snapped a photo and went on my merry way to enjoy batting practice and then the game. It was last Monday's thread that brought this long-forgotten photo to the forefront of the dusty attic that is my mind. Here is that photo: 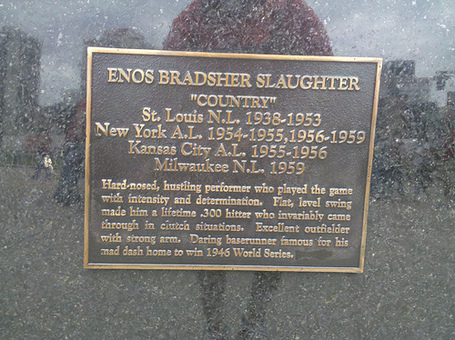 I love the writing style of the plaques on the statues and Enos Slaughter's is no exception. While the photo is pretty clear, if somewhat off-center, here is the text from the plaque describing Slaughter:

Hard-nosed, hustling performer who played the game with intensity and determination. Flat, level swing made him a lifetime .300 hitter who invariably came through in clutch situations. Excellent outfielder with strong arm. Daring baserunner famous for his mad dash home to win 1946 World Series.

Hard-nosed, hustling, intensity, determination, strong arm, daring baserunner, flat swing, level swing, and clutch--such is the stuff of legends. Legend and myth are often inextricably intertwined, and there is a part of this inscription--that is, a part of the embronzed lore of Enos "Country" Slaughter--that I wanted to take a closer look at on that fine summer day last season. Was Enos "Country" Slaughter so good in clutch situations that he invariably came through in them?

One of the problems with gauging a player's performance as being "clutch" or not is nailing down what exactly one means when one says a player is "clutch" or a situation is "clutch."* To do so, I tend to cast a wide net. That way, we are sure to consider nearly every variation of situation that could be counted amongst those situations that are "clutch." Luckily for us, the invaluable splits section over at Baseball-Reference makes this an endeavor easy enough to complete.

In looking at the career splits for Enos Slaughter at Baseball-Reference, he is a prime candidate for such an exercise. For one, he had a long and distinguished career. Slaughter made a lot of plate appearances over many years, driving up his PA totals in specific situations so that they are close in total to what a typical season would produce. Even in the more narrowly tailored of the situations in the "clutch" spectrum, Slaughter has a fair number of PAs. If we are using one great player to explore the notion of being "clutch," Slaughter is a good choice as he has had enough PAs to test the theory that any player, if given enough PAs in "clutch" situations so as to free him from the ups and downs inherent in a limited sample size, will see his production in those situations even out and approximate his career performance, or, his true talent.*

*The Great Debate on Clutch took place in the wake of the 2004 Boston Red Sox championship run and the 2005 season when David Ortiz was heralded far and wide as one of the greatest clutch hitters ever. John Hendry, owner of the Red Sox, even gave Ortiz a plaque (fittingly enough for this post) declaring Ortiz:  "THE GREATEST CLUTCH HITTER IN THE HISTORY OF THE BOSTON RED SOX." Nate Silver authored a piece that appeared in "Baseball Between the Numbers" and on ESPN.com Page 2, which I would encourage you to read if you have not yet done so.

*Slaughter only compiled 96 postseason PAs and every single one of them was in the World Series. In Slaughter's day, there were no League Championship Series and certainly no Wild Cards. He played back in the good ol' days when the National League Pennant meant having the best record in the NL and that the club went straight to the World Series to face off against the American League's standard-bearer.

Slaughter was a very good offensive ballplayer. His career numbers clearly establish this. But, as for being invariably clutch, as the plaque proclaims, I cannot say it is so. Calling any player's offensive performance invariable in baseball is difficult to do since it is a sport based on failure. Here is Slaughter, an all-time Cardinal great and Hall-of-Famer, who failed to get a hit in seven out of every ten of his at-bats and failed to get on-base in about six out of every ten of his plate appearances. And that upper-crust skill level reflected in his overall career line is approximately Slaughter's production in each of the various categories from the "clutch" spectrum above-charted.

Slaughter's batting average does not fluctuate too much, from a low of .291 in the playoffs to .300 for his career to a high of .306 with men on the basepaths. His OBP was understandably lower for his career at .383 than in situations where the game was close and/or there were runners on the bases. (After all, would you want to pitch to Enos "Country" Slaughter in such a situation? Better to pitch around him and face a lesser hitter, I would think.*) Slaughter's SLG does not vary greatly either.

*This begs the question, perhaps to be looked into at a later date, of who protected Musial's protector?

And so Enos Slaughter, a historically great Cardinal, was not invariably clutch. Slaughter was, though, one heck of an offensive ballplayer. Three times out of ten, he would get a hit and about four times out of ten, he would get on-base. One would want Slaughter to dig into the batter's box in a close game not because he was "clutch" but because he could hit a baseball and draw a walk with the best of them.