yesterday, we picked up ian snell and miguel batista on minor league contracts. there's almost no such thing as a bad minor league pickup.

well, the bottom has dropped out in 2009 and 2010. he struck out fewer than 6 batters per nine in both seasons and walked 4.86 and 5.15 batters per nine. as his K:BB rate approaches 1, his value is totally dissolving.

he's always had pretty weak control. even in his good years, shown above, he had some awful walk rates. there's not even a magic westbrookian ground ball rate here to save him either - his career GB rate is 40.7%.

even that is less concerning than the following fangraphs chart: 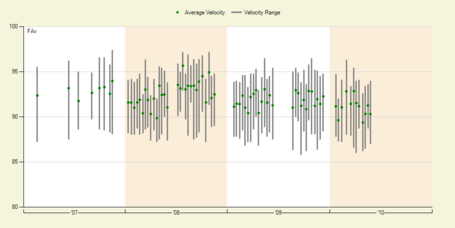 sorry, but a guy who has not yet hit his 30th birthday who drops more than one mph off his fastball is probably not a fixable project. one might look at the raw numbers and just guess he's a good bounceback candidate because he was okay before. closer scrutiny makes him look like a guy who's just in decline across the board: slower, less control, not fooling batters.

i like the move as depth, but i cannot see snell as being any better than what we have. i'd rather see adam ottavino - assuming he's healthy - start a game than snell. in many ways, the bryan augenstein acquisition was more interesting than this one. it's not a bad move, but it's not a good one.

we also picked up miguel batista, because this old guy started talking to us at the scrap heap and asked for a ride and we had room in the car. we gave him a lift and before we knew it, we were offering him a minor league contract.

first, batista's fangraphs page links you to this comment which reminds me amusingly of joe strauss's comment from last week:

Batista said he must either start or close this season. "You don't pay a guy $9 million to pitch middle relief," he told the Seattle Post-Intelligencer. 2/16/2009

lessee, how did that work out for seattle? he started no games in 2009, didn't get a save, and was replacement value. i guess, if you're not very good, you DO pitch middle relief for $9m.

batista hasn't made regular starting appearances (he scored a single start with the nats in 2010) since 2008 when he managed an appalling 6.23 FIP and was more than a win below replacement value.

the problem here is that, to the extent either has any value, they probably make the most sense as ROOGys. but, you know, we have lots of RH relievers; we have salases and sanchezes lined up who are much better than either. neither snell nor batista looks like a very good starter. and neither - given snell's declining velocity (and whatever physical condition underlays it) and batista's advanced age - seem like a very good candidate for a duncan makeover (c) .

i didn't expect anything miraculous from a minor league contract. depth is valuable. remember that one time evan maclane joined the team for three days and tony la russa openly commented to the press words to the effect of "who the hell is this? i just asked for some bullpen help, and this is what they send?" yeah, that was awesome. so, to the extent that we have two more pj walters in the system . . . yay?