I figured the other side of baseball can't break your heart and we've been talking about this for a little while, (UpBaby, I want to put your SB Nation St Louis article to shame haha) so even though this is not really fanpost material, here's my count on Carp's tattoos: 4. And I need to learn to tell the difference between left and right. Typical.

And if you guys know me at all, you know there will be pictures (that I stole from somewhere)

1. Let's start with the one we all know about but we have yet to see in its entirety: the non-pitching arm tattoo. Dan will allow me to steal a little from him too... The original Columbia Daily Tribune article from April 2009 indicating Carp got the tattoo in the 2008 offseason:

The new tattoo spreads over half the arm displaying his family via astrological signs. There’s a lion for his daughter, a Leo. A crab for his wife, a Cancer. An arch for his son, a Sagittarius. A bull for himself, a Taurus.

"It’s something I’ve been thinking about for a few years," Carpenter said. "My wife helped me come up with it.

I've been lurking for a little bit trying to catch a shot of that tattoo when the pitching staff throws around during batting practice, but so far no luck.

This photo below is from July 25th and was taken by Nam Y.Huh (AP) 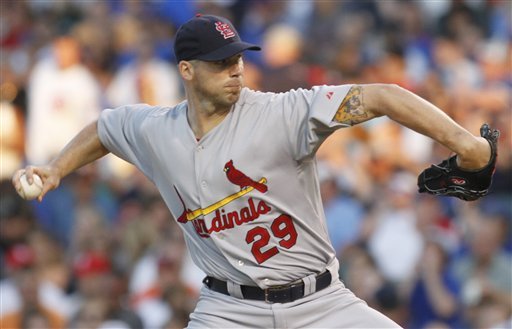 Photo below was taken Aug 21st by Chris Lee of the PD. Someone on the Cards staff, please continue shortening his sleeves, thank you. 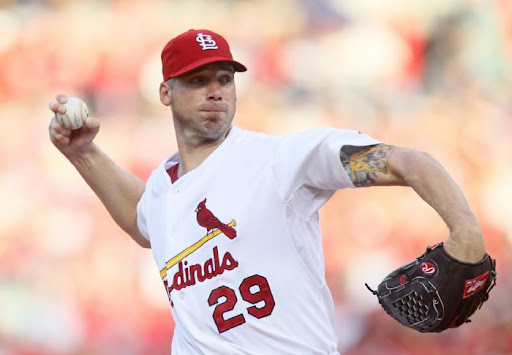 I also stole this from somewhere and forgot to take a note from where: 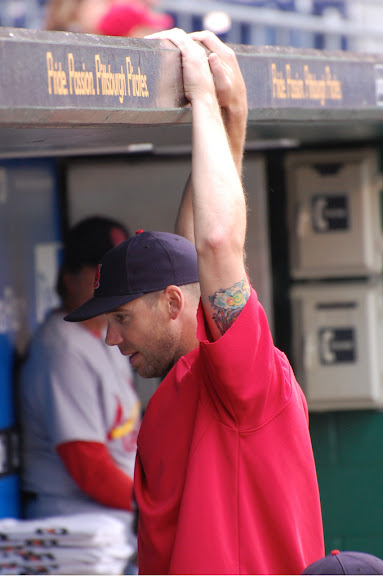 It reveals the back side of the arm. I flipped them and tried to enlarge and sharpen it a little but it's not really great 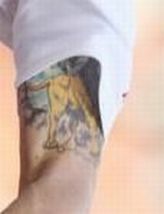 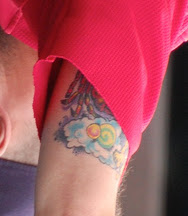 Update Jan 15th 2011: What can I say, I am awesome.. because boys and girls, a VEB exclusive (or at least the first full frame of it I've ever seen), Mr Carpenter himself allowed me to take this photo at the 2011 Cardinals Care Winter Warmup. I am surprised he didn't chase me away with security but I told him it goes in an article (yes, I will call this an article) and he agreed. Thank you, Carp, for being a good sport!!

2. The much talked about Aug 10th brawl revealed the top of a tattoo on his pitching arm too. The scar wasn't bad ass enough? I don't have a better screen cap right now but I'll try again later 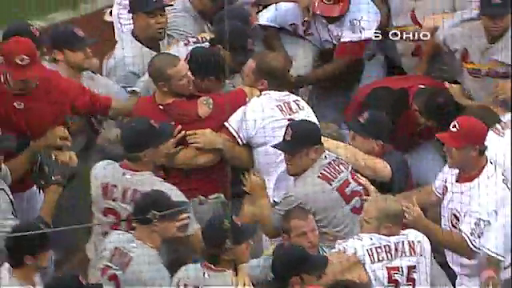 3. This next one - a small tattoo on Carp's ring finger - is a weird one, not because of what it is, but because of its timing. I noticed it in a July 3rd photo by Jeff Roberson (AP) when Carp took a beating by the Brewers and was pulled in the 4th. 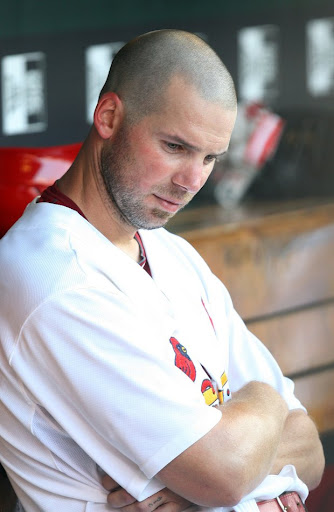 In case this still needs explaining Carp's wife's name is Alyson and I thought I remembered it was two dots for their two kids, but it looks like three, so either they have one on the way, or means something else or means nothing - it's their business.

And since I already felt like a stalker for even noticing that, I thought I'd go on a little investigation of when exactly it appeared. It seems quite strange for a pitcher to get a tattoo on his hand mid season, right?

Remember the little Apil 21st Edwin Jackson incident that caused the benches to clear and was the birth of possibly the most awesome meme of all time - CCDGAF? Here is a cap of Carp's left hand from that game - nothing 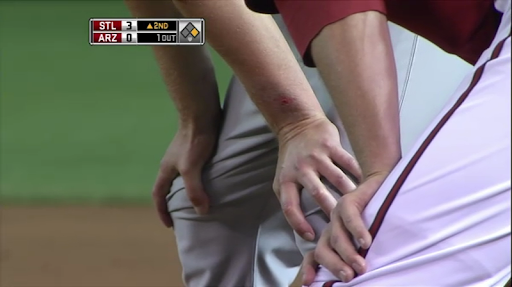 Then there was this June 1st photo by Scott Rovak (who is a photography genius, please don't sue me for borrowing this) - and here he already has it: 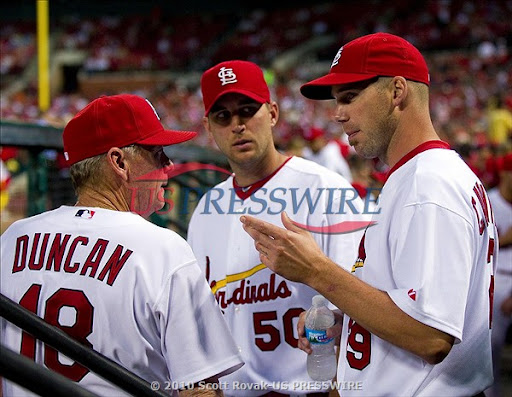 During the time the @MLBSTLCardinals was bombarding us with the celebrity Stand For Stan photos, there was a photo of Carp posted May 28th: 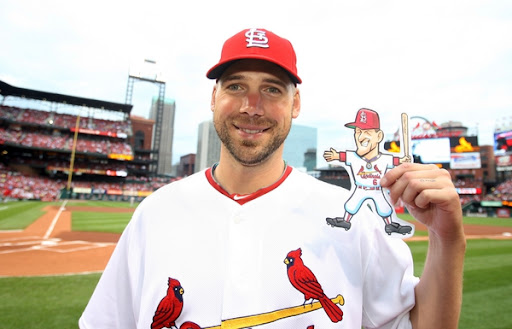 So I guess it appeared in the week between May 21st and May 28th - now we know Carp is even more bad ass - getting a tattoo mid-season means he can do whatever he wants and DGAF.

4. The last mystery tattoo that I had only heard a mention of but never saw proof of, I accidentally ran across today. Credit goes to 101ESPN Radio St Louis WXOS's Facebook page. From what I can tell it's an actual carp fish and other stuff I can't make out and it's huge. I don't know if it's even actually finished at the time the photo was taken (Spring Training 2010) but here it is: 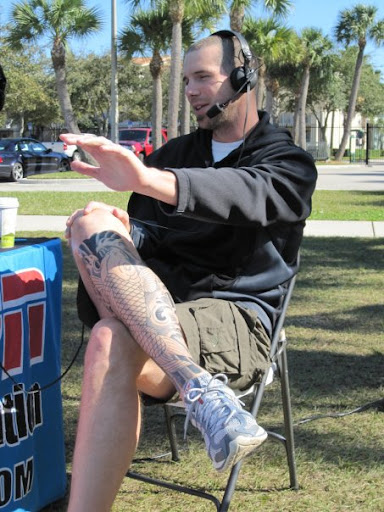 And now let's win some ball games so we can enjoy baseball again. Go Cards!

There's a video part 1and video part 2, as well as part 3, part 4 and part 5 Story behind the leg tattoo in Carp's words:

"about determination and perseverance, what I've gone through in my life [..] it's a Japanese koi fish, has nothing to do with people calling me Carp"

Tattoo artist explains that in Japan the koi is a royal fish that constantly swims upstream and has features of a dragon. Carp's tattoo is of a a twin koi with one is swimming up and the other down, and it's also about Chris' family and him being two different people on and off the field. So there you have it, no more mystery 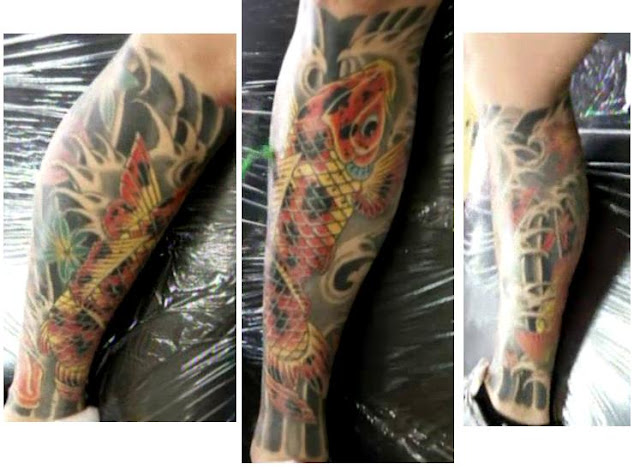 5. New tattoo showed up on the back of Carp's other calf in Spring Training 2012. We'll have to investigate :)

Bonus: especially for Yadi2Second who was asking for a screenshot of Kyle Lohse's scar. I found a decent shot of the whole thing in some of the pictures I took at Busch, so here you go: 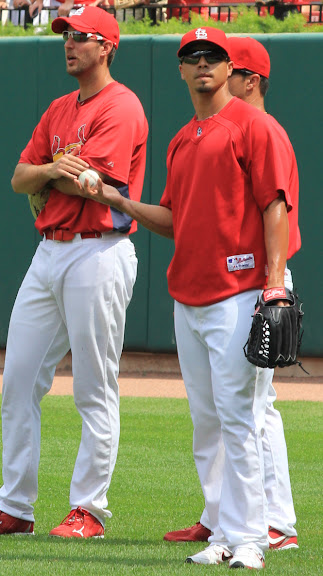 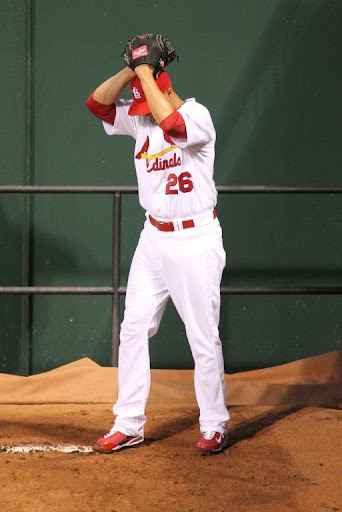 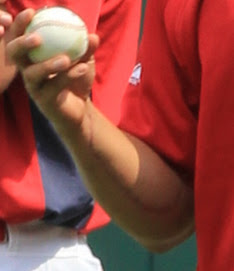 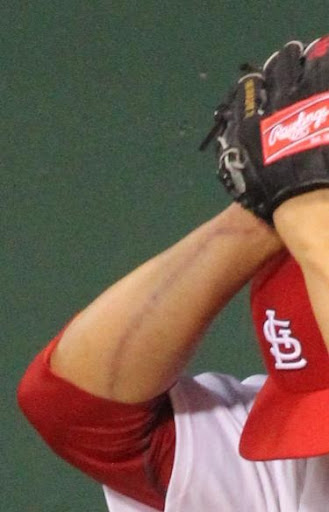