Share All sharing options for: Colby, Fastballs and Pitch FX

Everyone's favorite robot is taking in some minor league action this weekend, so he asked if I would step in for him.

About a week and a half ago commenter stl522 asked about Colby Rasmus's swing being geared for the inside fastball and mentioned that the scouting report on him was to attack with the breaking ball.   To me that feels like a two part discussion

I'll make an attempt to provide data/insight into both questions and hopefully we'll be able to come up with some answers.
To truly answer the first question I'd need access to scouts and unfortunately I have none (I find it hard to get access to scouts never leaving my mother's basement and all).  As a proxy to actual scouts I thought the best course of analysis would be to compare how many fastballs Colby is seeing compared to other notable LH hitters with similar wOBAs.  The following table summarizes that research

Clearly not all of the players in that table arrive at their ~0.370 wOBA the same way Colby does; however it is still fairly illustrative that Rasmus is seeing the lowest percentage of fastballs among the group. I'd say the table seems to support the assertion made by stl522 (among others). It doesn't necessarily prove anything as there are plenty of other variables at play, however it points us in that direction. Also of note, there isn't much change in the types of pitches Colby is seeing this year compared to last.

To answer the second question we can turn to pitch type linear weights (rv100s) derived from Pitch F/X data.  I looked at all of the data from both 2009 and 2010 and put together a few graphs.  The following graph shows Colby's rv100 for the various pitch types (binned by fastball (FB), breaking ball (BB), and changeup (CH)) against right handed pitchers. 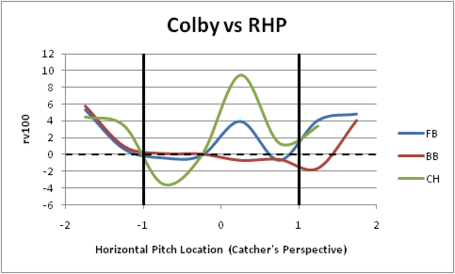 This chart seems to match perception as the highest run values are middle in and are the straight pitches (FBs and CHs).  The part that was most interesting to me was the fastball that is an inside strike.  I thought that he might be a little better in there than the results showed.  Also interesting is the relative neutrality of the breaking balls.  He seems to struggle a little bit with the slider/cutter under his hands, but other than that he's pretty neutral against the breaking ball.

Here is the same chart against LHPs 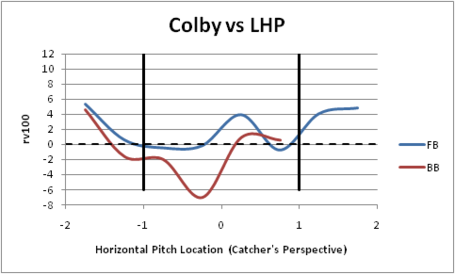 It follows a similar pattern; middle in and straight is pretty good, but pitches away are neutral to bad.  Left handed breaking balls away have been his undoing.  As was mentioned earlier, these charts aggregate data from 2009 when Colby had a 0.218 wOBA and 2010 when he has a 0.348 wOBA.  With that in mind I did a yearly breakout as well and thought the the breaking ball data was interesting. 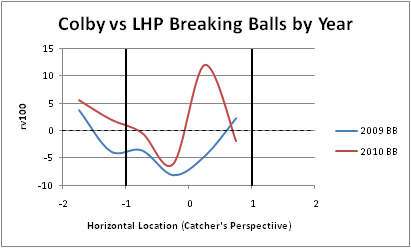 Colby has gone form being negative pretty much across the board to being a huge positive on the breaking ball that stays middle in.  His "true talent" is likely somewhere closer to the aggregate, but it's uplifting either way to see the positive changes.

All in all it appears that those folks that were making the observations about Colby being suited to hit inside fastballs are backed up by the data.  Whether this is a mechanics thing or something else, I'd have to defer to those folks that are much smarter than I about those types of things.