Share All sharing options for: Dave Duncan the fascist

I think it's safe to say that the three game sweep of the Reds has been the best moment of the year for the Cardinals. They won in convincing fashion, getting dominating pitching performances from their two aces (and another "bad stuff" day from Jaime) and even hitting a couple of bases loaded dingers.  Better (worse?) yet, a couple of the Reds most prominent players absolutely embarrassed themselves.  Brandon Phillips talked pre-series shit, and promptly went 2 for 14, and Johnny Cueto gave us a great image of what a little bitch really looks like (it's worth noting that the Cardinals were not very classy themselves, but at least their offenders, Carp and Yadi, manned up).  The Cardinals rolled into Cinci down by a couple of games, kicked ass, took names, and now find themselves atop the division standings.  Good stuff.  But celebration time it's over and now it's time to look forward onto the next series against the formerly Hated Rivals, the Chicago Cubs, with Jake Westbrook starting the first game.

When the rumors of Jake Westbrook being a Cardinals first started to surface, Cardinals fans were a lot more excited than you'd expect at the thought of acquring a 33 year old pitcher with a career 4.33 ERA.  The reason being Westbrook was already an extreme groundball pitcher, and such a pitcher working with the groundball-groupie Dave Duncan seemed like a match made in heaven.  The Cardinals did end up getting Westbrook, and, although it was severly dampened by the loss of Ryan Studwick, the potential for a great groundball pitcher still existed.

In his first two starts as a Cardinal, Westbrook has indeed shown why people were so excited to pair him up with Dave Duncan.  His groundball rate in those two starts sits at an astronomical 75.8%, and his walks per 9 (throwing strikes being another Duncanism) at 0.69.  However, what is most amazing is that Westbrook has been striking out batters at a ridiuclous rate.  His 11.08 strikeouts per 9 mark with the Cardinals is entering Stephen Strasburg territory - and while it is certainly a small sample size, strikeouts are a stat that tends to reflect pitcher skill very, very quickly.  So it does appear that Westbrook is doing something differently with the Cardinals.  Using Pitch f/x (!), I'll try to find the smoking gun.

First I dumped Westbrook's Pitch f/x data into R and ran a K-Mean clustering algorithm on each of his pitches to determine what type of pitch was being thrown.  K-Means, in this case, uses three pitch attributes (velocity, horizontal movement and vertical movement) and groups each pitch into a predetermined number of clusters (in this case 4). So here are what Westbrook's pitches look like this year using horizontal and vertical movement: 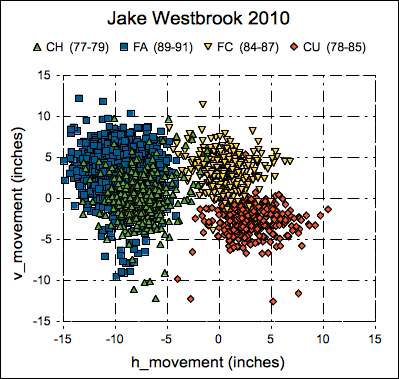 Westbrook gets tremendous sink on his fastball and changeup, which is obviously the main reason he is such a good ground ball pitcher.  The average sinker moves about 5 inches up compared to a pitch thrown without spin, whereas Westbrook's fastball is almost always below 5 inches and often has negative break (meaning the amount of sink he gets actually counteracts the backspin that he puts on it - that's incredible!).  His cut fastball and curveball are nothing special, although cutter's are almost always good pitches for a guy to have even if they aren't very good standalone pitches in terms of velocity/movement.

Breaking down his pitch selection with the Cardinals and Indians leads to some interesting results:

His fastball/changeup selection is unchanged, but he's been throwing about 7% more curveballs with the Cardinals at the expense of his cutter.  Curveballs generate slightly more swings and misses than cutters do, so even though a 7% difference is small (think 7 extra curveballs a game) that's likely a reason for his improved strikeout rate.  The fact that he's been able to command his curveball so well with the Cardinals likely is another reason: 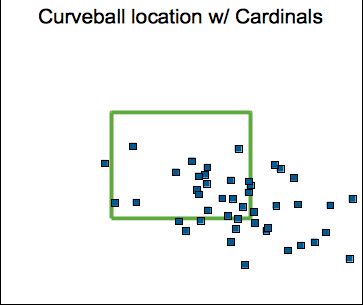 Of course there is much more to Westbrook's success thus far with the Cardinals.  His location has been better with all of his pitches and he's been getting ahead in the count more.  However, that kind of stuff is what every pitcher tries to do and there is no reason to expect his excellent command to continue.  Westbrook cutting down on his cutter usage in favor of more curveballs is a much more targeted approach to pitching, and interestingly enough, one that runs counter to Dave Duncan's groundball, strike throwing mantra.