We've talked about this so much, and so has FSNMW, ESPN and everyone, yet I am still amazed how this is still an issue for people who are not even fans of either teams involved.
So before I get more calls and VEB gets any more trolls telling us how our team should conduct itself and ask for suspensions for people who don't deserve it, here's a little breakdown of the Tuesday brawl and I hope this is going to be the last of it. Because video doesn't lie. Bitch!

Molina is preparing for the inning, not yet in position, nobody's talking to anybody, no one's looking at anyone, just business as usual 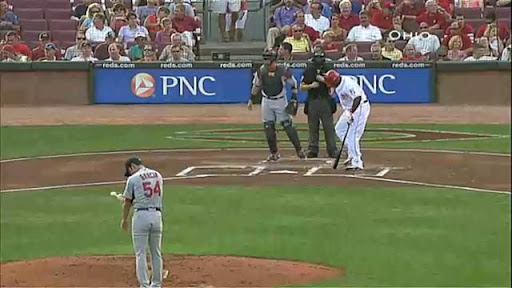 In all honesty, if you're going to badmouth someone in public and then pretend like nothing happened, do you seriously expect the other side to greet you with fresh-baked cookies and a hug? If you do, you are out of touch with reality.
So, since Phillips is probably a little delusional, he taps Yadier's shin guard AGAIN 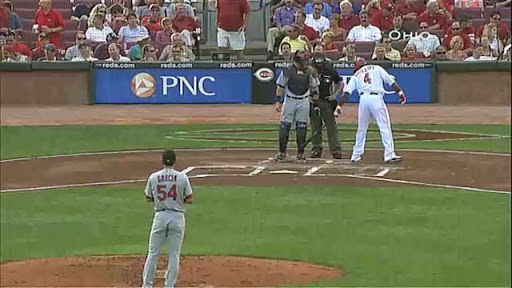 Now i don't know if his at-bat routine involves tapping the catcher twice (doubtful), but if you're told it's not welcome, take a note. Phillips steps out of the batter's box to do his practice swing (as if that'll do any good) and when he comes back Molina probably gives him a little piece of his mind. Could Molina have not reacted? Yes. Should he have? No grown man with an ounce of pride would let something like this go. Especially since it's all happening in public.

"I was ready to start the game and he touched me," said Molina. "With the comments he made yesterday, I said, ‘Why are you touching me? You are not my friend, so don’t touch me.’ Yeah, he was doing that hello thing with his bat. That’s stupid." src

Phillips puffs up, gets in his face and starts stepping towards Molina. Molina doesn't back down and now Lopez and Garcia, as well as Janish and Gomes are already running to the plate

Now, this could have ended here, as the Umpire separates them, but they both keep staring at each other, Phillips calls Molina a motherfucker, Molina calls him the same and as Yadier is being pushed back by the Umpire, Phillips keeps stepping towards him 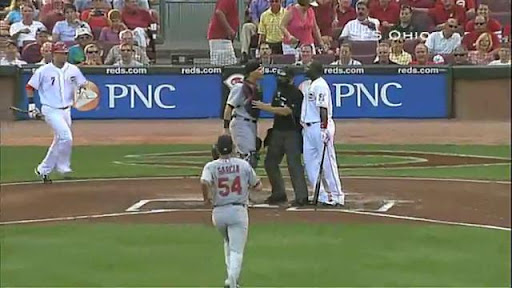 Notice who needs more restraining from both players and umpires - Molina's pile on the left, Phillips on the right 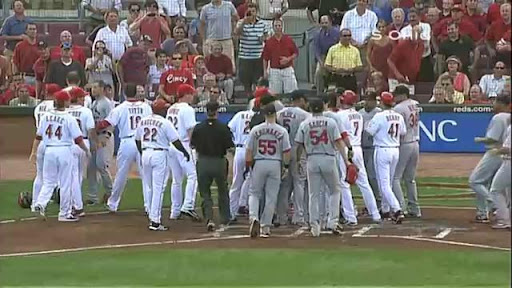 If you look at the MLB footage, you can see Rolen and Molina talking, Rolen nods several times and says "I know" - so much for everybody thinking the same way Phillips does as he claimed 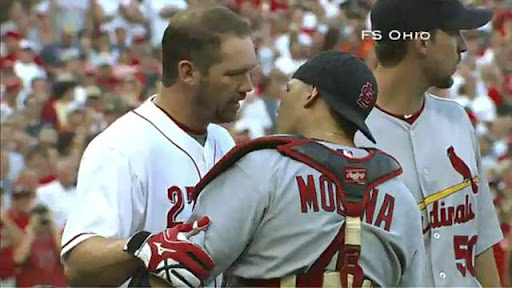 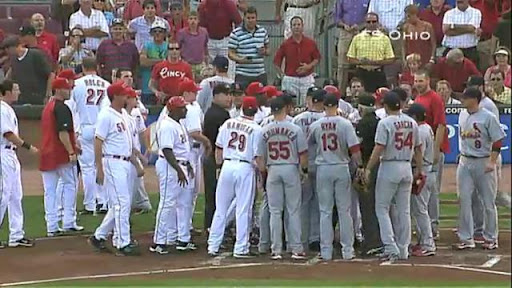 Gomes also visible upset, needs to be held back, with yelling Dusty Baker marching in from behind not making this thing any easier 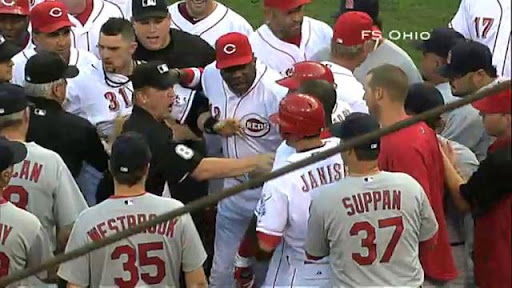 All Dusty Baker had to do to stop this from escalating is tell Phillips to shut up and play ball. He and Walt Jocketty both said they don't approve of Phillips' comments to the press, so why act like this is everybody else's fault?

Baker is being directed by the umpire to move, taking Phillips with him where he runs into Oquendo 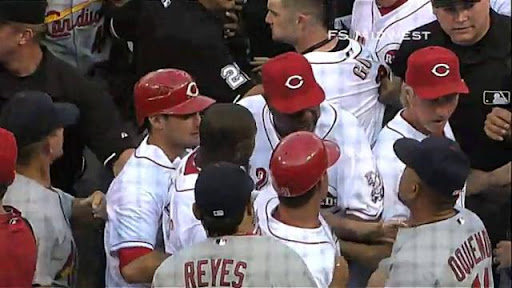 According to Dusty "That thing was over until some people [Oquendo] started talking." src 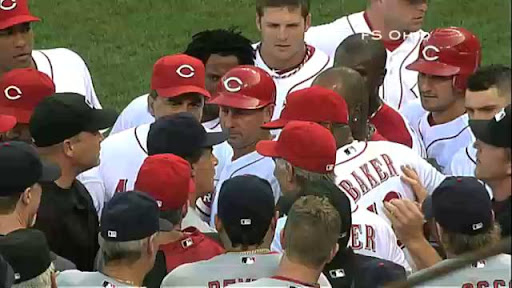 Lots of barking (notice where Cueto and Gomes are positioned) 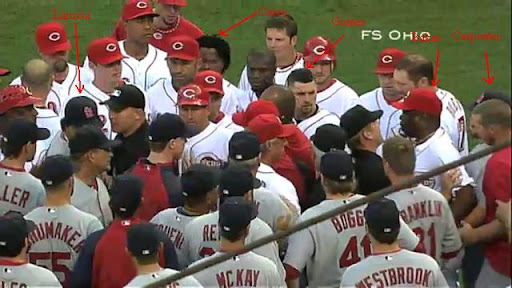 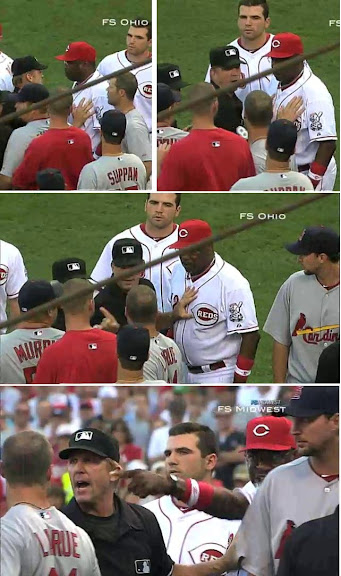 Should Carp have said anything? Probably not. I don't know if he was reacting to something that was said or just threw in a comment or what but all hell broke loose from there. Rolen goes a little too abruptly towards Carpenter and Larue and from the back everyone storms in 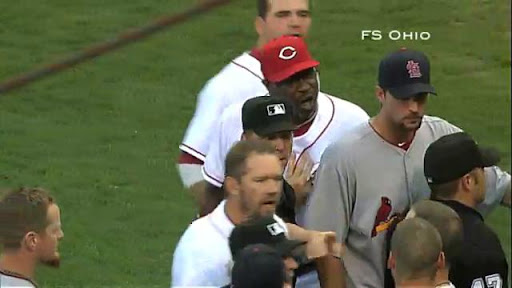 Watch Hernandez, Gomes and Cueto run towards Carpenter. They run behind everybody trying to throw punches

And how about this fist 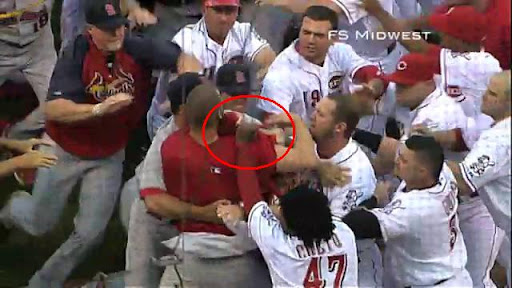 At this point Jason Larue is trapped between Carpenter and Rolen, both of which are trying to hold back and protect Carpenter

And how about this grab 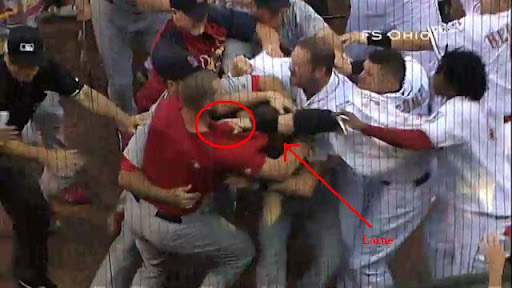 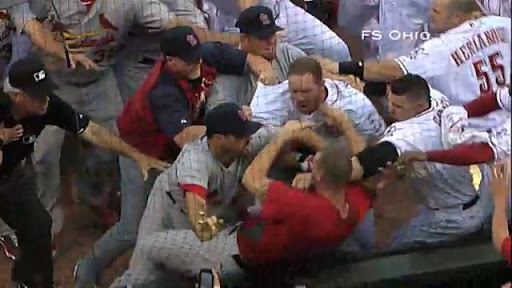 Cueto is now being pinned into the net by his own teammates, after he himself ran in front of the entire crowd trying to get a piece of the action - so much for being "scared" and "protecting" himself, no one is trying to hurt him 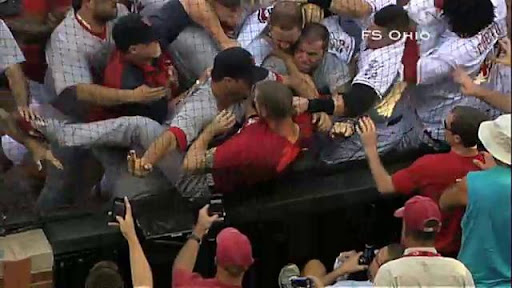 You have Carpenter and Cueto against the net, Carpenter pinned worse, people swinging and grabbing at him, yet he doesn't throw a single punch, while Cueto, surrounded by his own teammates is kicking Carpenter in the back with his spikes 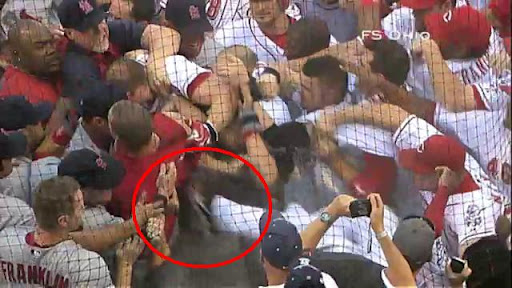 Now Cueto is kicking Larue IN THE HEAD like a maniac, while he's wearing spikes

Jason Larue falls down in the crowd after being kicked in the head several times, but Cueto keeps kicking (warning, monster gif below) Note: I created this gif at 60% speed. In reality, stuff was happening way faster than this.

And as if kicking him repeatedly in the head is not enough, now he has to grab for Larue's throat 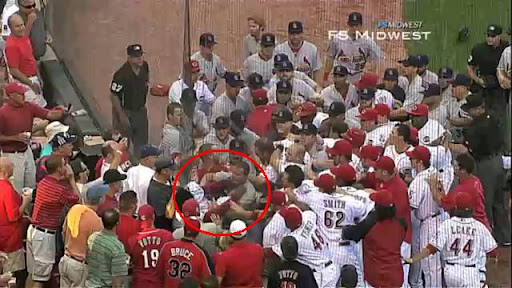 And now Hernandez got Larue in a headlock 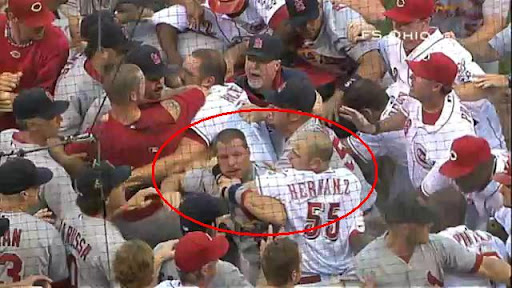 Cueto has to be restrained and taken out of the crowd by his own teammates, while Hernandez keeps going at Larue. Carpenter is brought to the ground, McGwire falls under everyone, Suppan somehow crawls out from under the crowd, Miller has to restrain Hatcher. Larue suffers a concussion, has injuries on his face right outside of his left eye, his lip needs stitching, he's got badly bruised ribs, Carpenter has spike marks on his back

The moral of the story:

- Brandon Phillips - talking smack in professional sports makes you look like and asshole, and if you can't back that talk up, it just makes you look like an idiot. Always remember that in a team everything you say and do represents your team and no one appreciates being made to look stupid.

- If you are the leader of your clubhouse be careful what you do: Carpenter - maybe leave your manager do the talking, Rolen - making sudden movements even when you mean to keep the peace can be quickly misinterpreted and you have a fight on your hands.

And now, please no more trolls telling us who needs to be suspended for what, who caused what and how this could have been avoided. Watch the video and look at the score.