Anatomy of a Curveball

Share All sharing options for: Anatomy of a Curveball

Hello everybody, with Dan on vacation the VEB higher ups were kind enough to ask if I would be willing to pinch hit for a day.  I jumped at the chance to put some analysis in front of you guys.

As a quick comment on yesterday’s game, here is a chart on run distributions comparing 2009 and 2010 actual runs scored. 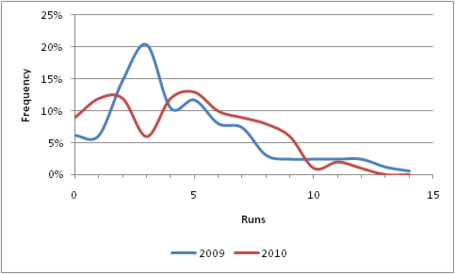 Clearly these are actual data points and don’t necessarily speak to true talent; however, it does confirm the common talking points.  Yes the offense is scuffling.  Yes the Cards have been shutout or held to one runs more frequently than last year.  That being said that graph even looks "flukey" (and I'd venture to say not representative of the true talent of our offense).  Hopefully the guys will get if figured out.

Being the optimist that I am I wanted to talk about something a little more uplifting though, Adam Wainwright’s curveball.  I’ve always been fascinated by good 12-6 curveball be it Darryl Kile’s, Matt Morris’, Wainwright’s, or Carpenter's, but I haven’t put much analytical effort behind what makes them effective.

Before I dig into the details I need to familiarize you with a one metric I’ll use throughout.

Now on to the analysis.  Generally when it comes to curveballs, I’d say there are two primary variables that are likely to impact its results, movement and location, and a few other variables, i.e. sequencing, that will have an effect as well. I’ll tackle each of these elements individually and see what we can learn. 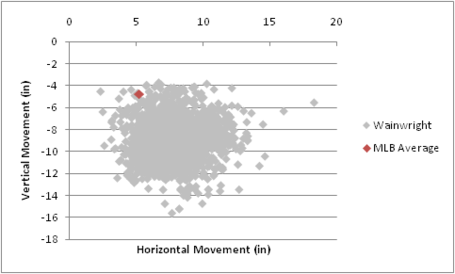 The chart shows that Adam has well above average vertical movement (as is obvious to anyone that has watched him pitch) to go along with well above average horizontal movement.  This chart clearly doesn’t say anything about how that movement does or does not make him successful though.  For that we need to turn to the Rv100 associated with various levels of movement.  Unfortunately I’m not an expert at using Loess regression and creating the heat maps a la Dave Allen or Jeremy Greenhouse so I’ll simply be looking at each dimension separately.  First vertical movement

I apologize for the size of the charts, but you can click on any of them to get a larger view.

The chart plots the vertical movement on the y-axis and Rv100 on the x.  For this and the rest of the charts negative runs are good (i.e. runs saved).  The chart is broken up into all pitches in the left chart and swings only in the right.  The separate lines represent the handedness of the batter.  It appears that against LH hitters the more vertical movement the better, but he has been more successful against RH hitters with a sharper curve.  These conclusions are independent of whether the batter swings or not as the curves are shaped nearly identical, just with differing magnitudes.  It appears that Wainwright is at least subconsciously aware of these dynamics as his frequency distributions lean towards the more effective break patterns.  He throws an extra ~5% of pitches with with more than 10 inches of vertical break to lefties than righties.

Moving on to horizontal movement.  Here is a similar chart to the previous one only movement in now on the x axis with the run values on the y.

Note the different vertical scales on the two charts.  These charts feel fairly intuitive to me, when getting swings it is helpful to have the pitch moving away from a RH hitter (large horizontal movement) and not moving in too much to a LH hitter (small horizontal movement).  It appears this is balanced out somewhat by the difficulty of keeping these pitches in the strike zone (difference between the swing graph and the all graph).

Clearly movement isn't everything as a sharp breaking ball that always bounces or is always belt high isn't going to be extremely useful.  With that in mind let's look at how Adam does when he spots his curve in various locations, first by vertical location.

And then by horizontal location

The takeaway from these charts for me is that overall his curve has good value when in the zone and bad values when outside the zone (with the exception of out of the zone away to RHB).  In general his curve has been better when away from righties and when inside to lefties.  This isn’t too surprising as it seems like a lot of strikeouts against lefties are curves that he buries at their feet on the inner half.

One final interesting piece of information is pitch sequencing.  The following table summarizes his results after various pitches

It appears that his curve is best after the harder stuff (FB, SL) than after the slower stuff.

Those are the big things that I found when I dove into Adam’s curve.  Most of it is fairly intuitive and matches what my eyes are telling me, which to me somewhat validates the data coming out.  Hopefully you found it at least a little interesting and picked up a couple of new pieces of information.