The opposite of shell-shock

Share All sharing options for: The opposite of shell-shock

Chris Carpenter didn't gain velocity, he didn't regain perfect command of his curveball—though it was better—and his cutter didn't become the cruise-control outmaker it was in 2009. But sometimes, in this PitchF/X, pitch-by-pitch, maybe-we-were-wrong-about-Ben-Grieve world of modern sabermetrics it might be helpful to take the old strong-DIPS position on pitcher performance: Chris Carpenter wasn't as bad in those two losses as he looked, and the main issue might-just-might have been a .486 BABIP.

On balls in play in Carpenter's first two starts in July opposing hitters did their best "Long Levi" Meyerle impression. They hit a ton of line drives while they were at it—35%, against a seasonal average of under 20%—but that's not something that's going to keep happening if you remain convinced that Chris Carpenter is a Major League pitcher, specifically a Major League pitcher not living in 1871, when Levi Meyerle's BABIP was indeed .480.

So yesterday Carpenter allowed four hits, including a home run, in 30 at-bats. That was pleasant, and shouldn't have come as so much of a shock as it did to me. 2009 was perhaps the last post-surgical gasp of Cy Young caliber Chris Carpenter, though we don't know that yet. But nobody said he had to decline all at once.

On a vaguely related but untimely note—if I were Joe Posnanski this would be coming after an asterisk—how's this for pitchers' intuitive understanding of the luck of balls in play? Carpenter got shelled for two consecutive starts, badly enough that it seemed fair to wonder if his forearm problems would make him the second 2010 Cardinal out of every pitcher in the history of baseball to suffer from extreme compartmentalization syndrome, and most of it was on balls in play. Everything he threw in the zone came back for a line drive. And in his next start he threw 70 strikes in 101 pitches, which looks something like this: 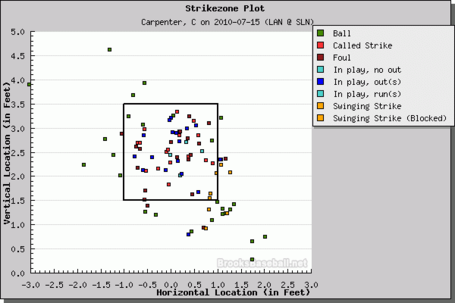 I'd swear Dave Duncan must have a VEB username; his gameplan for Carpenter appears to have read "Throw it right at their stupid bats, regress the crap out of them."

I'm a bit pressed for time this morning, but other game notes: