Going into Spring Training, the starting rotation was one of the biggest question marks for the Cardinals.  Although the 1-4 of Wainwright, Carpenter, Penny and Lohse looked solid enough, the 5th starters role was very much up in the air.  The early favorite seemed to be Kyle McClellan, with guys like Rich Hill in the periphery.  I, among others, clamored for the Cardinals to bring in John Smoltz who was very good for us last year and would have cost a pittance.  Nobody seemed to entertain the idea of Jaime actually winning the job out of Spring Training as nobody thought the Cardinals were crazy enough to put a pitcher just coming off of Tommy John surgery and with little experience in the high minors in the rotation of a contending team.  However, the Cardinals apparently were crazy enough to do just that and so far it has worked out.

Through 85.1 innings pitched Jaime, and his shiny 1.79 ERA, has legimately been one of the best starting pitchers in baseball and easily the most promising left handed starter to pitch for the Cardinals since Rick Ankiel.  While Ankiel was successful by putting up absurd strikeout numbers, Jaime has been able to keep the ball down and avoid hard hit balls.  While Ankiel possessed a 95 MPH fastball and a kneebuckling curve, Jaime has an assortment of moving fastballs and offspeed pitchers (as well as his own kneebuckling curve).  Today, I'll like to go a bit more in depth as to how Jaime has been so successful this year.

So far in 2010, Jaime has thrown exactly 1275 pitches* that were captured by the Pitch f/x cameras.  Based on some scouting reports and quotes from Dan 'n Al, I figured that Jaime threw 6 different pitches: a fourseam fastball (FF) a twoseam fastball (FT), a cut fastball (FC), a changeup (CH), a curveball (CU), and a slider (SL).  Using those pitch types and a K-Means clustering algorithm, I was able to classify each pitch Jaime threw this year.  I then plotted each of them out by their vertical and horizontal movement relative to a pitch without spin.

*Before his last start 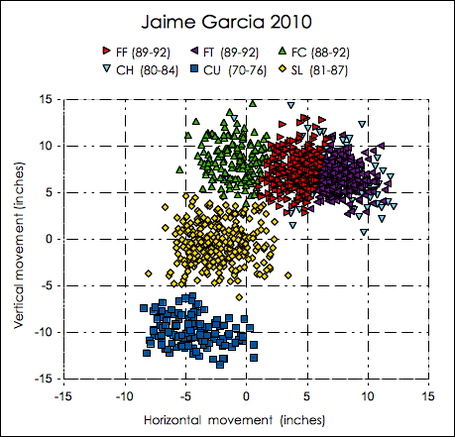 The most interesting thing I can say about Jaime's stuff is the incredibly wide range of movement it gets.  His fastballs all are thrown with roughly the same velocity and vertical movement but vary greatly in horizontal movement.  Some of that variation is due to park calibration errors in the Pitch f/x cameras, but a lot of that is real.  The pitch that I'm labeling a cut fastball (which might just be a variation of the fourseam fastball) averages around -1 inches of movement.  The average fastball from a left handed pitcher moves about 6 inches towards the first base bag and Jaime's fourseam fastball moves around 4 inches, so his cutter has 5-7 inches of cut - if that makes sense.  The other variations of his fastball have pretty typical movement for a lefty.  In addition, all pitches are above average velocity wise, which is always a good thing.

The pitch he goes to most frequently (after the different variations of his fastballs) is that slider we hear about so often about.  According to Jaime himself, it's a cutter, but looking at velocity and movement, it's acts very much like a slider. There are some sliders that he throws a little bit harder and with a bit more rise, so perhaps those are his cutters and he also throws a slider.

The changeup is the more inconspicuous part of his repertoire.  There is nothing special about it really - the velocity and movement of the pitch essentially mirrors that of the average left handed changeup, but at the very least it makes a good "surprise" pitch to throw the righties.

At any rate, the one thing that is obvious is that Jaime has a wide range of stuff, having multiple variations of the fastball in addition to at least three quality offspeed pitches.

The next thing I wanted to take a look at was how Jaime mixed up his pitches according to the situation.  As I showed above, Jaime has a very versatile repertoire and I bet there are some interesting patterns of pitch selection based off of batter handedness, base/out situation, count, etc.  First let's check out how he pitches to righties and lefties:

Against lefties he goes to the slider nearly half of the time and almost never throws his changeup (only two times the entire year).  That's pretty typical I would say.  He throws his curveball equally to both batter hands, which isn't surprising given the 12-6 break of the pitch.

Interestingly, his fastball selection doesn't vary much based on the batter handedness.  I would have suspected he typically used one time of fastball more often against left handed hitters or something, but that doesn't appear to be the case.  He throws slightly more cutting fastballs against rightes, but it's not a significant difference.  Now let's check out Jaime's pitch selection based on the count:

Unsurprisingly, he's gone to the curveball and slider more when ahead in the count then when even or behind, and to the fourseam and twoseam fastball more when he's behind.  However, he uses his changeup and cut fastball roughly equally across all counts.

Jaime uses his fourseam and twoseam fastball in pretty much the same fashion - down and awayish to righies and down and inish to lefties.  Assuming that's really what he's trying to do, it seems as though his twoseam fastball command is much better as his location with them is more tightly clustered: 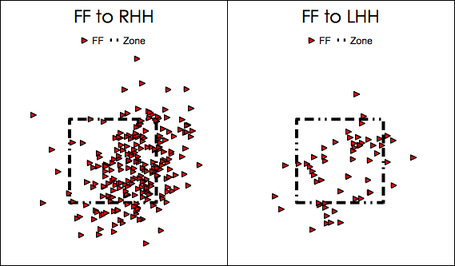 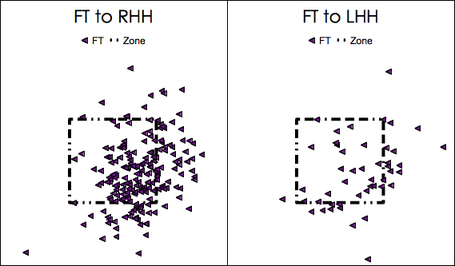 All charts are shown from the catchers point of view - click to enlarge.

However, his locates his cut fastball a lot differentially than the other two variations, seemingly aiming to go inside on righties and away from lefties: 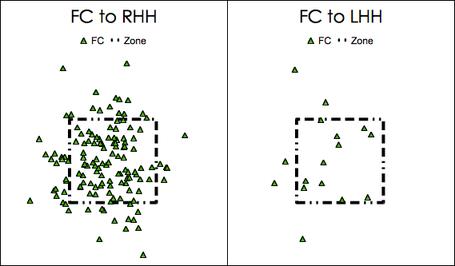 This is encouraging to me as it implies that Jaime really does treat the cut fastball as a different pitch than the others and seems to have some degree of control over that.  In other words, the type of movement his fastball has is not just random but also correlates loosely with the location of those fastballs.

Now let's take a look at his offspeed pitch location.  I combined the three other pitch types into one chart to save room: 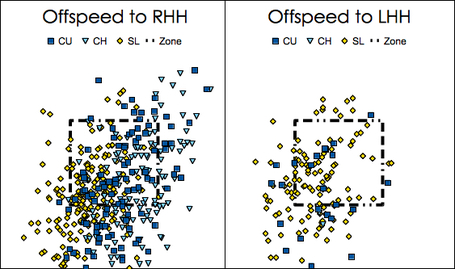 He generally throws his slider down and in to right handed hitters and down and away to left handed hitters.  With the curve, it looks as though he just aims down the middle and hopes it breaks somewhere nicelike.  Given the abundance of curves below the strikezone and on the corners, that seems to have worked for him so far; however, he has also hung a lot of them.  That lack of command might be the reason why he doesn't throw the pitch more often. He throws his changeup down and away to righties and almost never goes to the pitch against lefties.

There is actually a whole lot more that I want to look at with regards to Jaime's pitching style, namely his better performance with runners on base and what exactly is fueling his groundball abilities so far, but time and a database contraints prevent me from looking at such things for right now.  Consider this a preliminary look at Jaime's 2010 season so far, with hopefully more analysis pending.