That's two games in which Suppan has been about as good as Tony and Duncan could have expected and two games in which he's left before getting himself in line with the win. Honestly, as someone who was neither a Suppan fan nor a self-immolater, I've enjoyed watching Suppan to this point—he's very obviously working within the La Russa/Duncan framework, and he's done pretty well, if you like that Tom Glavine just-off-the-plate fastball. 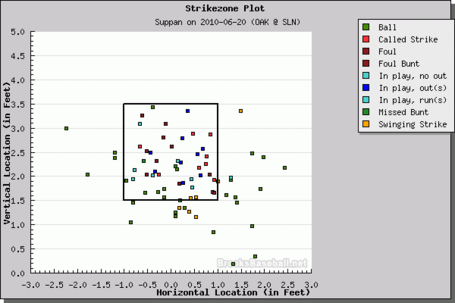 He even had some swinging strikes on those please-don't-swingballs, mostly when he brought his fastball or curveball a little lower and out of the zone. He's avoided the walk, he's thrown a few strikeouts, he's got an obvious gameplan; that's about all I can ask for in the Cardinals' sixth? seventh? starter. And La Russa and Duncan are perfectly willing to take him out before the fifth inning is complete (and replace him with a youngster, no less!) For all their bluster, I think the two of them have perfectly reasonable expectations for Suppan's performance, and I appreciate that.

Bringing out Hawksworth for a third inning, though—that was the product of unreasonable expectations. La Russa's famous for putting his players in position for positive outcomes as often as possible; he did that earlier in this same game with Jeff Suppan. To bring out the Cardinals' embattled long reliever, get two scoreless innings out of him, and then come back to him for a third is overreaching both in terms of the game situation and Blake Hawksworth's psyche. It's a bad move and it didn't work out.

But speaking of perfectly reasonable expectations, mine involve Matt Holliday hitting two home runs every day. Of course, he could consider doing it with runners on base...

At the mothership newswire, some bullet-pointable news and decisions—