Adam Ottavino's debut and OH MY GOD HOW DID WE GET SHUT OUT BY CARLOS SLIVA?!

Share All sharing options for: Adam Ottavino's debut and OH MY GOD HOW DID WE GET SHUT OUT BY CARLOS SLIVA?!

As of writing this the Cardinals are winning 6-1 vs. the Cubs and Fat Miles has just grounded out, once again confirming my belief that he is the worst player in the history of baseball.  Despite that, this game has been amazing for the Cardinals.  Wainwright continues his streak of ridiculous consistency, Pujols hits two three bombs and raises his seasonal OPS to just under 1.000 which is hilarious given his massive struggles this year (don't EVER question Albert), Matt Holliday got a hit with runners on and picked up an actual RBI, and the Cards were able to salvage a series win against the Hated Rivals, in which they played amazingly in two out of the three games.

However, the game in which the Cardinals did not play amazingly is the one I'm interested in writing about today.  On Saturday, the Cards lost 5-0 to the Cubs in a game that featured two very interesting storylines.  Firstly, Adam Ottavino made his major league debut, and secondly, Carlos Silva pitched seven shutout innings allowing just two hits, no walks and struck out 11 (!) batters.  Both performance deserve more in depth analysis

After a couple years of meh results in the minors, Ottavino was finally living up to the potential the his draft position portended.  He maintained his steady 8 strikeout per 9 rate, while cutting his walk rate in half and even bumping up his ground ball rate a little bit.  Combined with solid scouting reports hinting at actual potential, Ottavino represents a legitimate prospect in contrast to the usual Walters' and Hawksworth's in our system.  So when he made his debut Saturday, people were excited.

The results were mixed.  He struck out 5 in 5 2/3 innings and was able to pitch around a couple of errors, however he also allowed 11 baserunners (including 6 walks!) and labored through the game.  Of course that being his first start and all, we'd expect some jitters so the results of the game don't really tell us much about Ottavino as a pitcher. Fortunately, Pitch f/x data can tell us a lot in only one start.  Using the files availaible at Brooks Baseball, I took a closer look at Ottavino's debut specifically looking at the velocity, movement and location of his pitches.

By my count, Ottavino threw 71 fastballs, 8 changeups, and 15 sliders.  His fastball averaged 93.3 MPH, with a range of 89.1 to 96.2.  Needless to say, that is well above average fastball velocity for a right handed starting pitcher and that alone is one of the main reasons why Ottavino was a prospect all of these years despite mediocre numbers in the minors.  His changeup averaged 85.3 MPH.  According to research from Dave Allen, the optimal fastball-changeup velocity differential is between 5% and 12%.  Ottavino's changeup was about 9% slower than his fastball on Saturday, so that's a pretty good differential.  His slider was the slowest pitch he threw, averaging 82.7 MPH.

The movement on his pitches was pretty standard.  His fastball had a couple inches more horizontal movement than the average right handed pitcher (meaning it broke more into a right handed hitter) and slightly more sink.  That makes it closer to a sinker than a straight fourseam fastball, which should make Dave Duncan happy.  His changeup had similar horizontal movement compared to the average righty, but about 3 inches more sink to it.  Again, another positive sign.  His slider had pretty generic movement, although with slightly more drop than that of the average righty.  For those who want to see a pretty graph, look here.

So based off of his stuff, Ottavino scouts out very well, which is what we expected going in.  Using my work in progress method of similarity scores, and only focusing on velocity and movement - ignoring pitch selection and location, Ottavino's pitches last night were most similar to those of Jason Berken, Jason Hammel, Ubaldo Jimenez, Mike Pelfrey and Justin Masterson in 2009.  Burnett and Joba also make the top 10.  So that's pretty good company. Ottavino's location, on the other hand, was not nearly as impressive: 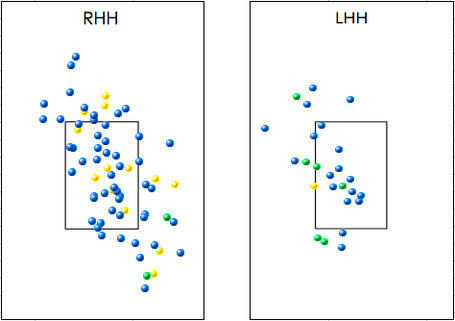 The blue dots are fastballs, the yellow dots are sliders and the green dots are changeups.  Each of those plots are from the catchers point of view.

His location against lefties actually looked pretty good.  He pitched them away, not throwing anything over the inner half of the plate and was especially able to place the changeup right at the peripheries of the strike zone.  He even through in a couple of nice backdoor sliders.  He faced eight lefties in the game (not including the intentional walk to Koyie Hill), and allowed two triples, walked two and got four outs including a strike zone.  So his results against lefties were pretty awful, but given his solid pitch location and good changeup velocity/movement, I'm inclined to think that was more Cubs batters taking good at bats than anything that Ottavino did wrong.

His location against righties, on the other hand, looked terrible.  He was all over the place with his offspeed stuff, throwing three sliders above the strike zone and hanging some others, and his fastball location wasn't very fine.  Of the 68 pitches Ottavino threw to righties on Saturday, just 32 were inside my approximation of the strike zone. Interestingly enough, righties didn't do very well against Ottavino.  Of the 18 righties that he faced, he walked three, but struck out four and allowed just three singles and a ton of ground balls.

All in all, I think we can say this was a positive start for Ottavino.  He struggled with his command, but showed above average stuff and a sporadic ability to locate his pitches.  His repertoire looks like one that would fit in great with Dave Duncan's ground ball philosophy if he can learn to keep the ball down. 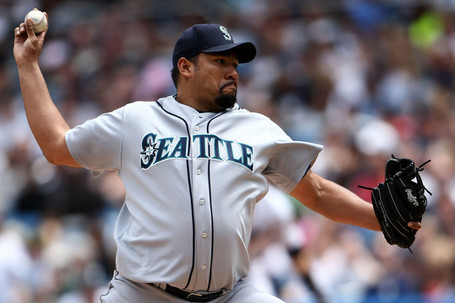 It's not the first time either.  In the Padres series, the Cardinals struck out seven times against Jon Garland, who's almost as unintimidating as Silva.  The Cardinals had a combined 19 strikeouts and 22 swings and misses against two guys who top out at 92 and who's game plans consist of throwing slow sinkers and the occasional tepid offspeed pitches down in the zone.

On the year, the Cardinals are in the bottom of the league in strikeout and contact rate, although not too far below the league average in either category, so perhaps this phenominon isn't as inauspicious as it might otherwise be.  However, it's truly amazing how the Cardinals are able to turn a couple of guys who's usual fascist inclinations would make Joel Pineiro blush into Nolan Ryan.