If you asked the Cardinals' ad agency to draw up an ideal post-Holliday baseball game, like they do ideal car or cell phone owners—35 year-old city-dweller Judith loves to take her Honda Element to the beach, when she's not busy hauling plants for her organic landscaping company!—it would look, almost without divergence, like that one.

Albert Pujols gets pitched around and stranded on base, but Matt Holliday drives in some runs, the Cardinals' deep lineup gets on base, and Adam Wainwright goes deep into a game that rarely seems in doubt. Those are the New Cardinals; Albert Pujols hits, most of the time, but it's okay if he doesn't, Felipe Lopez gets playing time in particularly advantageous situations, Brendan Ryan isn't being followed around by special episode sitcom music.

Tony La Russa may well have sensed the gravity of the situation and brought out the bullpen equivalent of the good china, sending Franklin and McClellan out instead of their less-established right-handed understudies. The only thing I missed in yesterday's ideal Cardinals game, in fact, was some inspired La Russian weirdness; short of platooning Skip Schumaker and Colby Rasmus—admittedly, platooning Colby Rasmus with a guy he once groomed as a starting third baseman—it was a conventionally managed affair. When the team is performing according to plan it seems like all of La Russa's tricks, not just the pitcher hitting eighth, go back into the bag.

I'm most fond of WPA in all its variants as a novelty—as a stat it's far too situational for my liking, and as a way of thinking about baseball it seems almost regressive in the way it confirms our earliest and least helpful suspicious about baseball: that the ninth inning is the most important part of the game, that the most important players are the ones who come through in the clutch, et cetera.

But with Matt Holliday finally having done something, the world famous Fangraphs WPA Graph can wax a little profoundly about the difference between a team playing listlessly and a team playing perfect, concise baseball: 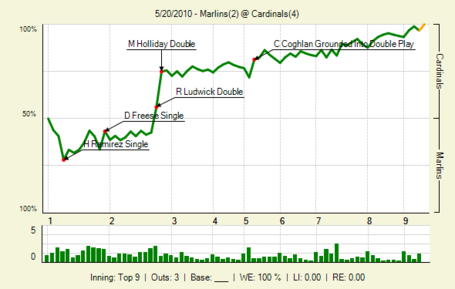 If Matt Holliday takes that gawky swing of his and pops one a mile high to the second baseman, that muddling around from the second inning on looks a lot more like a tightrope walk than a breezy walk through a day game. And that's what listless baseball looks like: choppy WPA waters when the win expectancy is at 45%, instead of 75%. When it's the team's new, highly paid acquisition riding the waves down it's worse yet.

It was one game against Nate Robertson, so I won't get too excited about things, but it was also interesting, and in keeping with the pleasant atmosphere, to see just one strikeout for the Cardinals' recovering dinger addicts. That's the most restraint the Cardinals, who've struck out as many as 12 times in regulation, have shown all year, and with two of Cardinals fandom's most pressing concerns—Brendan Ryan's inability to hit, Albert Pujols's latent humanity—manifesting themselves first as excessive and out-of-character strikeouts to see just the one, coming from an out-of-slump's-way Ryan Ludwick, is a welcome surprise.

Finally, it's probably still too early to talk about this, but Adam Wainwright is having an even better season this year than he did in 2009. He's aging conspicuously like a hitter—in place of a pitcher's usually injury-pocked, age-independent, sudden improvement is the gradual development of the hitter who adds power into his late twenties. Not that I'm complaining.