The Dave Duncan Method; a visit from the ghost of Rob Dibble

Share All sharing options for: The Dave Duncan Method; a visit from the ghost of Rob Dibble

Looking at Brad Penny's numbers through two starts—the box score lines, sure, but more specifically the velocity ad movement charts, which show a fastball that is about as good as fastballs get—after another of the red baron's indispensable draft updates, I'm reminded just how strange it is to watch a team whose rotation is restocked, year after year, via the Dave Duncan Method.

It's not about finding players who are statistically valuable the year before; it's not about finding guys who look ready to break out according to CHONE or PECOTA or any other projection method. It's certainly not about finding players who are good now, and are likely to be good in the future. It's like scouting high schoolers. Todd Wellemeyer? He has a good fastball, looks kind of like a starter. Bring him in. Brad Penny? This kid is huge! Look how hard he throws, even at the end of the game! Take this slightly altered quote from the baron about Nick Tepesch:

The results just haven't matched the talent for [Brad Penny] in his [recent] career, and I actually think that makes him an excellent [free agent]. He'll likely go far lower than a guy with his arm should, and if a team could make some much-needed changes to his game I think he could go a long, long way.

This is more or less how every discussion about pitching in St. Louis has to go, now. Penny's strange 2009 and absent 2008 didn't give us much to go on at all as far as a reasonable 2010 projection was concerned, but the Cardinals handed him a $7 million signing bonus contract anyway, and thus far the must-needed changes to his game have worked out in their favor. It's just like following draft picks, only azruavatar and Erik will need to change the name of their hyperventilating prospect geek fraternity to Present Redbirds.

With Penny it's been all good news so far, but there's been no major changes to his gameplan to report. He still throws his fastball a lot, and incredibly hard, and he still uses it as his out-pitch; he threw just one curveball in a strikeout count, normally reserving it for the beginning of an at-bat, and he laid off it in the later innings. The change-up—or whatever it was he was throwing at 89 miles per hour that registered to Gameday as a change-up; Al called it a splitter—was more likely to be used in any count than the curveball, and he got three of his four strikeouts with it. If that's the new pitch, it is to this point an unqualified success.

But all this is necessarily like becoming a huge Shelby Miller fan after a YouTube clip and some newspaper reports. The Cardinals signed a few interesting descriptive words—big, hard-thrower, groundball-heavy—and some fragmentary stats, and the early results are positive. As for the long-term meaning of it... prospects take a little while to develop.

Now—well, we have a guest. Ladies and gentlemen, Mr. The Ghost of Rob Dibble. 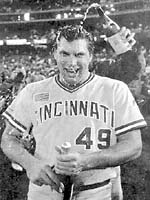 What's up, Viva El Birdos? Still queer? It's me, the ghost of Rob Dibble, here to talk a little about your dweeb friend Joe Pineiro in between trips to the super-hot incorporeal nightlife.

Don't even start, high-pants. Don't. Even. Start. I know you're gonna tell old Dibs how you saw him walking along the mortal coil not an hour ago in some stuffed shirt, yakkin it up on TV. QED, my man, QED—if that's Rob Dibble, what's he doing in a suit and tie when there's Nasty Boy mischief to make? Answer: Rob Dibble died the moment he broke his armbone doing what he loved second-best—Throwing. The. Heat. And I've been doomed to roam the earth a badass spirit ever since.

There. Get it? Now that Remedial Ed is over with maybe you jock-sniffers will let me talk about my boy Joe Pineiro, who you might know a little better as Wuss McGirlthrower from last year. After 2009 my boy Christy Mathewson had to leave Joe's body—spirit rules, right? Seriously. And dude was pretty worried about it. He went up and down the spirit world, asking every last nerd without a pulse whether they could help him win ballgames without striking people out.

His Dibness heard this and thought—no way, kid. No. Freakin. Way. I said, "Hey, Joe." Kid looks at me. "Hey, Joe. Over here. How about you stop pitching like a little girl and start pitching like your Uncle Dibs? I can make it happen." Kid thinks it over for a minute, and says: yeah, I'm game.

Kid's been working with me ever since. And let me say: yesterday was only the beginning. Watch it, I'm telling you. Bitchin! Like, ghost-motorcycle bitchin!

Kid asked me—"Dib-man. Dibstein. What do I do when I'm ahead in the count?" And I told him: Throw it by him. "What do I do when I'm behind in the count?" Throw it by him. You get the picture? Joe did. Those New York Yankers didn't stand chance one. Seriously. You gotta bring that 89 mile an hour heat-sauce, and you gotta bring it until the umpire waves his fist around and Robinson Cano chance has to walk back to the dugout less of a man. That's all there is to it, and that's all there was to do it.

Look, you guys have this thing going with not striking anybody out, and whatever. Different strokes for different nerds, right? D-D-D-Dibble's not about to rain on your goofy parade. But some last words for you clown ball itchers: the minute Brad Penny's a free agent, bro is striking people out. I saw that fastball. I'm making sure of it. All right, kids—ye olde ghost iPhone is blowin' up, so I'm out.