Share All sharing options for: Cliff Lee and Gerald Laird

The Philadelphia Phillies are making it increasingly difficult for ostensibly mid-market teams to remain under the radar—at this rate their owners can expect yet another sternly worded e-mail from Bill DeWitt sometime in the next week, titled "RE: Re: Ryan Howard deal." Cliff Lee is the latest example of the Phillies' willingness to go over the top now that they've established their mini-dynasty. Here's a chart, adapted from Cot's Contracts, that will probably piss you off: 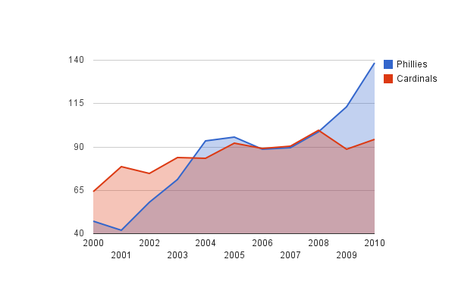 The assumption was that the Phillies would have to lower payroll this season, or hold it just about flat, but apparently the thought of being able to get Cliff Lee at an old-hometown-discount price was enough to drive the payroll even higher. (Those payroll jumps, if you're interested, are thanks mostly to imports early on—Jim Thome and Kevin Millwood, then Eric Milton and Billy Wagner to hit that 2004 spike. The payroll drops in 06 and 07 when Thome and Abreu leave, then spikes again when it comes time to pay Pat Burrell, Ryan Howard, Jimmy Rollins, Brad Lidge, etc.)

Here's a related one, for attendance. 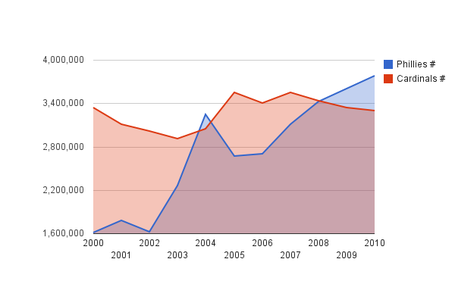 The Phillies'  situation over the last ten years reminds me of the Cardinals' in the ten years before that. I can't think of a better way to describe what existed at each moment in the team's fanbase than slack. The Cardinals were a subpar team with an indifferent ownership group that responded by refurbishing their ballpark, importing a high-powered manager, and trading for one of the biggest draws in baseball, and have been a perennial NL juggernaut ever since.

The Phillies were a bad team that began developing some good players; they spent a little money ahead of opening a new ballpark and since getting good they've spent a lot more money. Considering the Phillies led the National League in attendance last season I had assumed they were out of slack, but I guess they couldn't pass Lee up.

The Cardinals seem just about slackless, too—since 2000 they've contended almost every year, built a new ballpark, won two pennants, and brought up the best player in baseball, and attendance is a little better than flat (it's tough to compete with 2000, the last season of the everybody-watch-Mark-McGwire era.)

Nevertheless, the Cardinals' payroll is about to make a similarly graph-friendly jump if they do, in fact, sign Albert Pujols. I don't think anybody was prepared for the Phillies to make the leap into the Yankees/Red Sox stratosphere, but if they want to sign Albert Pujols and continue to compete at their accustomed level the Cardinals will necessarily be moving closer to what I thought was the Phillies stratosphere...

Gerald Laird is a slightly better bet than Jason LaRue, which is good—like LaRue he was once a pretty good offensive catcher and hasn't been in two years, but Laird is four years younger than LaRue was at the time and does a little better on Total Zone's defensive metric. For all their revolutionary talk the Cardinals did change their routine, at least a little; Laird, 31, is their first backup catcher to begin his first season with the club younger than 34 since the great Einar Diaz, who was 32 in 2004.

But Laird's been miserable with the bat for the last two years, and his Bill James projection—.233/.297/.349—puts him about where LaRue was in 2009. Our best hope is that the Cardinals think he's enough of an upgrade that Yadier Molina ends the 2011 season ambulatory; I think Laird's age and the Cardinals' early talk of concentrating on the position is a clear indication that they hope to allow Molina to play less. But really, I would have settled for Bryan Anderson.