In which the Robot comes to collect

Share All sharing options for: In which the Robot comes to collect

Before we get to the good stuff, I want to make a quick endorsement of a Dan Uggla trade. The Marlins acquired two mediocre relievers for Camern Maybin, a past future stud prospect, this week in an exchange with the Padres. It's a coup for the Padres from my view as their ballpark lends itself to mediocre relievers and they've done an excellent job in the past of assembling a bullpen.

The Cardinals have a similar if less compelling degree of surplus with the bullpen. Eduardo Sanchez struck out more than a batter an inning last season between Springfield and Memphis. While I expect the Cardinals to keep him in AAA to begin 2011, there's no reason he can't be eased into a bullpen role during March and April.  There's not a player from the 2010 St. Louis bullpen that I wouldn't trade at a moment's notice. They're all flawed in some fashion and relievers are intrinsically replaceable in a way that other positions aren't.

To sweeten the pot, I'd poach from a couple other minor league positions. The Marlins could have their pick of any pitcher not named Shelby Miller or Lance Lynn. As much as I'm not a fan of Lynn, it's wise to preserve that 2011 depth. So if the Marlins like PJ Walters, Brandon Dickson, David Kopp, Scott Schneider, Joe Kelly, etc. they can have them. There's no one outside of Miller who has made themselves untouchable.

The last area is catcher where, at least the Cardinals' organization feels like, there is some depth.  Bryan Anderson, Steve Hill and Tony Cruz have all managed to stick at catcher as they've moved up the ranks. None of them are great (or even good defenders) but their offensive is well above average relative to their positional peers thus far.

Dan Uggla makes a ton of sense for the Cardinals.  He's a cost controlled player, if expensive, and we're under no long term obligation. Uggla's defense relative to Schumaker is only marginally worse at second base and his bat is significantly better.  Over the course of a full 2011 season, Uggla is a 2-2.5 win upgrade over Skip Schumaker.  He'd make sense in either the two or five spot of the lineup and the Cardinals could recoup some value in draft picks in 2012.

So any Cardinal reliever + minor league pitcher + minor league catcher for one year of Dan Uggla at full cost.  I'm sure you'd have to tweak the deal in places. Maybe they want an outfielder as well or Skip Schumaker himself. The point is that this is almost certainly the most significant upgrade (outside of Jake Westbrook) that the Cardinals can make this offseason at a single position. I've long coveted Dan Uggla -- maybe now we'll finally get to see a proficient second baseman.

There's a myriad of reasons to expect this won't happen though. Skip is TLR approved and one of "his guys" who are always more tenuous to deal than those players that aren't. The Marlins are a very scouting heavy team so their opinion of the Cardinals minor leaguers would play a very significant role. And it's hard to discount the fact that the Cardinals would be paying 5 times what they originally planned at second base and well beyond what they're supposed cap is for that position. That's a significant amount of payroll to take on.

Those caveats stated, this is still the deal I'd like to see go down this offseason though.

Now, I'm coming to collect on bets. This is the first time since avatars were added to SBN that my picture will not be a Bender picture.

Rasmus OPS was .859 for the season up over 140 points compared to 2009. Not even I could make that kind of a heart based bet. Because I'm HEARTLESS. MWAHAHAHAHA!  I will now suffer through a week of confusion as I can't identify my own posts.

It's still unclear to me who the picture is of but guayzimi's avatar should be changed from taser kid to dead mother shortly. All I recall of that picture was that danup recognized it right away. Which means danup is either uncomfortably familiar with guayzimi's dead mother OR it's a dead actress that danup is familiar with -- which may or may not also be uncomfortable depending on how much you like the TCM channel. There was no agreement on duration of avatar so I'll leave that at guayzimi's discretion.

The Cardinals took two of three from the Reds to start the year on April 5th and 7th. They'd drop the third game of the series on the 8th. Chazerize's signature is now required to be "Colby Rasmus > Jay Bruce". We'll call it for three weeks since I made no mid-season collection on this bet. Chazerize, please emerge in the comments from the darkness of the silent majority with your new signature.

Ryan Ludwick had a very good first half of the year, though it's hard to remember after the trade and his collapse in PETCO. He OPS'd .822 in the first half which means that I get to pick fourstick's avatar. I've thought hard about this. It's important to me to have something both meaningful and recognizable. I pondered a Care Bear. I've thought about a unicorn and a pegacorn. Both recognizable, neither pertinent. I've thought of just having the number 4 out there. Not terrible interesting though very recognizable. So, I found this humorous thus I unveil fourstick's new avatar: 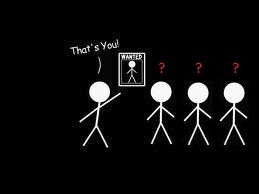 Ha! I'm going to chuckle everytime I see this.  Do you get it? Fourstick(men)? HA! Genius.  Thus I have collected on my bets. We'll need more next year and I may have to get a little riskier since I feel like I left some avatars on the table. Don't worry though, "I'll be Bach."

(Sad but true story before I actually go. When I was in grade school, I actually had a sweatshirt with the "I'll be Back" quote on it and a picture of Bach on the back. Seriously. I can't believe I didn't get beat up in grade school.)