Okay, I was planning to do a Brad Penny post.  You know, with some Pitch f/x, a little storyline thrown in there, maybe even a .gif or two... it was gonna be sweet.  Unfortunately, life got in the way, and I didn't start this post until 12 last night (or this morning, whatever floats your boat).  Then, when trying to decide what the hell Penny was throwing that looked like a 90 MPH slider last year, I decided to hold off till next week.  Instead, you get to read a very random assortment of notes and observations.  Yeah!

First let's talk about Holliday... he's always going to be on my mind until this deal gets signed.  It's no secret that we are really the only ones in the mix for him.  Felonius, in an excellent comment in the hot stove post, actually went over all 30 teams and logically eliminated nearly every team.  Once you get past the Yankees, as they are always a threat, only the Angels appear to have the resources and an opening in the field.  Given the Angels have been silent throughout this whole process, in inclined to believe that they are not really in it.  If you trust my inclination, and are confident that the Yankees are satisfied with adding ~8 wins from Granderson and Vazquez, that raises the question of what the hell Boras and Holliday are doing.  There is nothing wrong with playing for the best offer, but when it's pretty clear the best offer is already on the table, it just seems like they are just jerking us around for little to no gain.  Either that, or the Cardinals are still competing with other teams for Holliday's services and all of the shenanigans being pulled by Boras are validated.  Like I said, it's always on my mind.

If we don't sign Holliday, there still appears to be a wealth of potentially valuable free agents still on the market.  MLB Trade Rumors keeps an up to date list of all remaining free agents, but I'll just list the ones who I think would be the best options:

There are other guys, including Kiko Calero, Russ Springer, Brett Myers, Orlando Hudson and Joe Crede - but I don't have time to go through all of them.  It will suffice to say that there are still a lot of options still available shall we fail to sign Holliday.

A while back some people asked to see some Pitch f/x info on Ankiel, which would hopefully shine some light on his miserable 2009 season.  Again, Felonius comes to the rescue saying, very specifically, what I should look at:

Digging further into his contact and swing numbers, his Out of Zone (OOZ) swing % was only a tiny bit higher than his career previously. His in-zone swing % was only a tiny bit lower. The NUMBER of pitches he received in and out of the zone was pretty much the same as it was in 08 and 07, so pitchers weren’t throwing MORE pitches outside. HOWEVER, his OOZ contact% was CONSIDERABLY worse (it was down like 5-6%, which is massive).

The next questions is whether or not this stemmed from something the pitchers were doing differently or something Ankiel was doing differently.  First off, let's look at the O-Swing and O-Contact numbers for 09 vs. 07/08.  I recalculated the numbers myself, defining the horizontal zone using the numbers in this article by John Walsh and the vertical zone by the numbers input by the Gameday stringers.  Here is what I got:

As you can see, he made contact with roughly 10% fewer pitches that he swung at outside of the strike zone in 09 vs. 07 and 08.  Let's check out the location of those O-Swings to see if we can make out any major differences: 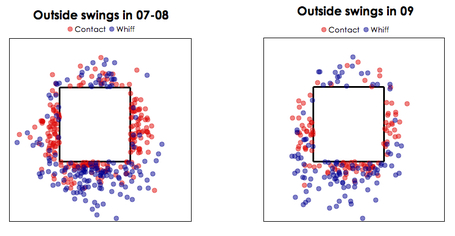 The major difference appears to be with the curveball and slider.  In 2007-2008, only 6.3% of pitches that he swung at outside of the strike zone were swung on and missed on curveballs.  Last year, that number doubled.  I'm not sure whether or not that's sustainable going forward, or if it really means anything.  Using my definition of O-Swing, Ankiel made contact on about 22 fewer pitches outside of the strike zone last year than he would have given his 07-08 numbers.  While that's significant, it's really too hard to slice and dice 22 pitches and see anything interesting.

At any rate, Ankiel is gone for good, I hope, and we won't have to witness his horrific plate discipline and contact skills anymore.