It hasn't come up, because his ERA is still rapidly approaching one, but the motion to rename the black part of home plate the Ryan Franklin Zone has begun to run out of steam—since the all-star break he's struck out seven and walked seven in eighteen innings, and in August (where he's not allowed a run in eleven innings) those numbers are four and six. His BB/9 for the season, 2.3, is coming up on twice as high as it was in his first season with the Cardinals. His BABiP is .211.

I bring this up just to say that I don't have a major problem with the Ryan Franklin extension—he's been great this year, and an additional $4 million in 2011 isn't going to make or break this team. But it just seems so inessential—he's already signed past this stereotypical Contract Year, and despite his wavering command his value is never going to be higher than it is right now—that I'm not sure of the benefit, except to boost the morale of a guy who should really be having the time of his baseball life anyway.

I'm not going to get mad about it. Of all the guys in the bullpen to be mad about—well, he doesn't register.

Meanwhile, in The Offseason: Dave Duncan won't come back, unless he does. There's a lot to take out of this story, because there's a lot of divergent story hung on one spindly little clothesline—Dave Duncan's future in St. Louis. Let's try this with bullet points.

1. Dave Duncan is not happy about Chris Duncan. This should and will surprise nobody; he wasn't happy when it happened, and he's probably less happy now that Chris is unemployed going into the end of the minor league season. Strauss treats this thread as the lead item,  and it might be the best symbol of the disconnect that's grown between the dugout and the front office, but it seems almost secondary to the question of Duncan's continued employment with the Cardinals; it's symptomatic of something that's not the main complaint.

It's clear that neither Older Duncan nor La Russa feel that Younger Duncan was treated with the respect due him on the way out (or while he played), although Duncan's contention that he doesn't "know of any player in this town who went through what he experienced" makes this Ray Lankford fan do a brief double take. But even as Duncan maintains that his decision will be personal and not professional, he does so based on an event that sprang from his new, subordinate professional role—bullet point two:

2. Dave Duncan is not happy about the Faberge Egg Syndicate. This will come as a shock to those who associate the Clay Mortensens and Lance Lynns of the Cardinals' recent drafts with Duncan's pitch-to-no-strikeouts philosophy, but apparently Duncan is no longer a major force in the team's organizational pitching philosophy. Pull quote:

Since Mozeliak's hiring, player development has become more autonomous under vice president of scouting and player development Jeff Luhnow. A number of Duncan's confidantes, including former minor-league pitching coordinator Mark Riggins, have resigned or been removed. Duncan now isn't consulted on either potential player acquisitions or organization instruction. Communication between the two sides is scattershot, at best.

"It's changed the last three years," Duncan said. "We have our way of doing things up here, and they do things their way in the minor leagues. We're not involved. That's the way it is."

As the proud owner of an Anthony Reyes jersey I can't say I'm crushed by this idea, but not consulting Duncan at all on player acquisition—particularly in mid-season—seems like a needlessly acrimonious, inefficient way of doing things.As pitching coaches go, Duncan is more a Jocketty than a Mozeliak; his "thing", the reason he's here, is taking a certain kind of acquisition, a Woody Williams or a Ryan Franklin, and turning them into momentarily superb pitchers.

He shouldn't have veto power, but employing a pitching coach with his own philosophy is an implicit concession, to some degree, to his philosophy. From the new front office's reluctance to do that we can infer something else—if he's not being pushed out, they won't be that concerned if he thinks he is.

His use of "we"—that could be La Russa and Duncan or Duncan and his protege, Marty Mason—is interesting because of the next point in the article:

3. Duncan and La Russa aren't a package deal. It's La Russa who says this, not Duncan, which makes me think that La Russa's return in 2010 is a little more certain than we previously thought:

Duncan intends to coach next season, whether in St. Louis or elsewhere. Any perception that he and La Russa are intrinsically linked is incomplete.

"I've told him before that our personal relationship never stands in the way of the professional," La Russa said. "Nothing has changed, and nothing will change about that."

Likewise, La Russa believes a pull exists due to those returning next season from the current pitching staff. He dismisses any suggestion that his longtime ally has reached an indelible decision.

"I know when it comes down to making a decision, Dave has tremendous personal and professional interest invested in the guys here and the guys here next year," La Russa said. "He values that deeply."

Later on in the article La Russa says, while discussing the new organizational pitching philosophy, that some of the new ideas are different from what Dave—no "we" involved—believes. I'd be interested to see who gets custody of Marty Mason if Duncan leaves but La Russa stays. Mason's the official team shadowy figure; once every year or so people who like to think they have inside information claim that he's the real mastermind behind the Duncan Pitching Philosophy, and even the less conspiratorially inclined are aware that he seems like Duncan's natural successor. But if Duncan leaves, instead of retiring, he might go with him—given the organization's reluctance to commit (at least to the degree Duncan wants) to their philosophy, that might be the best thing for all concerned.

What this article confirms, more than anything else, is 4. The lines of communication are down. Wainwright had a great Dave Duncan game yesterday; he got a ton of groundballs, and he was relentless about putting his fastball in the bottom third of the strike zone. Look at this PitchF/X chart: 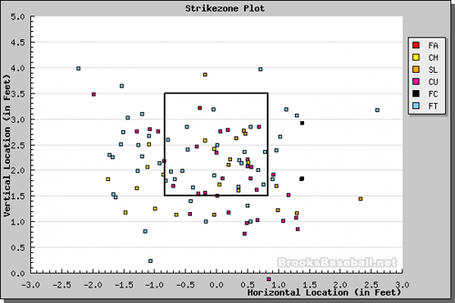 The last few batters he faced before he ran out of gas, all at once, seemed like a perfect explication of the Dave Duncan philosophy—he avoided going up in the zone entirely, he stuck to the corners at the middle of the plate, but most of all he concerned himself with firing fastballs into that bottom third.

But Wainwright is a (somewhat rare) example of how well things worked when a modicum of flexibility was shown on both sides. He's thrown a curveball as his best pitch ever since he was a Braves farmhand; it's not a prototypical Duncan pitch, but he's able to combine it with that fastball—the vast majority of which at least register, based on movement, as two-seamers—to get strikeouts and groundballs, and to avoid big innings when his fastball command falters. He and Reyes came up through the system at the same time—in hindsight Reyes's injury problems may have been inevitable, but in one case a player's strengths were supplemented; in another they were sublimated.

It's a shame that this kind of cooperation seems increasingly unlikely to happen in the future. As both sides move toward a split there's no room, between the Duncan faction and the Luhnow faction, to work together; maybe it couldn't have happened, but it might have been worth a try.