It's been a month and a half since the Cardinals last had the brooms out, so for each game against the Pirates I've been building in a little room for the obligatory let-down game; it didn't help that the last two began with the Pirates, a board-certified Team We Should Beat, jumping out to an early lead.

But these are the new Cardinals. Objectively speaking, Holliday and Lugo will not continue to post a combined MLVr of 1.549 runs per game. Subjectively, I no longer get listless and irritable toward those around me when the Cardinals fall behind early or line up against a young pitcher with bad stuff.

Oh, for God's sake! Don't just pop up like that. Aren't you busy pitching bulk innings in Detroit? At least busy enough not to haunt a website?

Don't look a gift-me in the mouth, danup, baby! I'm here for the object lesson.

I'm not looking forward to this. Let's hope he doesn't know how the jump works.

So danup, it goes something like this. You guys—and God only knows why, right? You guys keep trading away all your rotation depth for, I don't know, Mike Maroth.

Right. I don't know why or how, but that's a basically rational explanation of what the Cardinals have done. And I guess you could implicate that way of thinking, indirectly, as the prime mover in the chain of events that have led to Todd Wellemeyer making another start. The Cardinals' seeming nonchalance toward rotation depth both in and out of the system has led to Todd Wellemeyer's continued faux-relevance.

Prime mover? What a pseudointellectual thing to say! Anyway, this object lesson requires a table, and ghosts are far too sinister to use WYSIWYG editors! That means...

Oh... oh no—I feel different. I feel like, like I could almost get Major League hitters out on a regular basis. Something is compelling me to feed numbers into an MLE spreadsheet... something terrible...

It does, a little, but mainly because I was possessed for the sole purpose of producing a table. I don't even remember opening Excel.

But all things considered, Chris--and I hate to alter our relationship like this--I'm inclined to agree with you. I still think you should have been traded--I mean, do I ever--but it's obvious that the Cardinals, in remaining bound and determined to have Todd Wellemeyer to kick around anymore, are passing up a number of options that can if nothing else be just as bad as he is.

Wait, what? Did I get Viva El Birdos? Ghost travel is a little sketchy.Bone-chillingly sketchy!

No, I'm serious. Tony La Russa's most infuriating flaw, and it's one common to most managers, is his reluctance to demote certain regulars in-season. Kip Wells and Brett Tomko have had this exact same season before--a pitcher with a patchy but occasionally impressive career gets beaten into the ground but not out of the Cardinals' rotation. In situations like this the Cardinals' field management seems to have little idea of the concept of a replacement level, and without that they don't realize that guys below it can easily be replaced.

Here, I think, is what it finally comes down to: For Tony La Russa, Proving Yourself is something that happens once. Anthony Reyes didn't do it, and when he struggled he was removed from the rotation. Mark Mulder had already done it, some time ago, so he was sent back out again and again until he had to be wheeled off. Todd Wellemeyer proved himself last year; more specifically, he had several uninterrupted good stretches, something Reyes never managed, something his possible replacements haven't had the chance to manage yet. The proven switch is on.

The good news is that he might have somehow managed to unprove himself, which would be a Cardinals first:

As for Wellemeyer possibly staying in the rotation after Tuesday, La Russa said, "He needs to prove that he's the best of the candidates for that spot. If there's somebody, in our opinion, who's better than he is, then (that person) will pitch... There's other guys out there."

If La Russa really does see that--and I have a high enough opinion of him, even in the face of his flaws, to believe it a possibility--it's a blessing for the Cardinals, who still have a lot of meaningful baseball left before the fifth starter won't matter. But Wellemeyer's already made several starts too many, and as long as Tony La Russa manages the Cardinals--realistically, as long as the Cardinals have a manager--having in-season depth at a Proven position is never going to be quite as valuable as it could be.

Well, anyway... while I'm here, can my friend say hi to his family? His ghost family?

I--I guess so. Good behavior should be rewarded, is what I always say. Is he a long-time reader, first-time caller?

Good, good. Just as I planned.You've stumbled headlong into my trap once more, you contemptible snark-jockey! Creature of the night, attack! 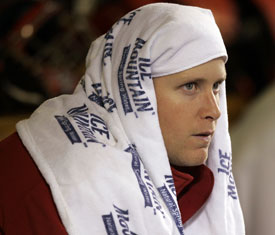 so do i jus talk into the ghost microphone?

It explains those 71 walks, doesn't it, Dan? He works for me now!

ima scary ghost man, watch out or ill scare you