(Because I am an idiot, I didn't look at the FanShots today and didn't realize that JBrew posted something very similar to this post.  I'm sorry if it seems like I'm mooching off of his idea.)

We are now over 1/3 of the way into the season, and Jim Edmonds is still not on a major league team.  That comes a pretty big shock given his success in Chigaco last year (d'oh); but now as a 41 year old who hasn's swung a bat in a while and probably needs a cain to go to the bathroom, it looks like Jimmy Edmonds' career is over.  Erik Seidman at FanGraphs already had a nice post, in which he expressed a sentimental opinion about Edmond's career and how he should not be forgotten admist HOF discussion.  Unfortunately, I am going to ignore his advice and approach Edmonds' career from a purely statistical point of view to see whether he should be in the HOF.

To do this, I will be making use of Rally's WAR found at baseballprojection.com.  First off, hitting: 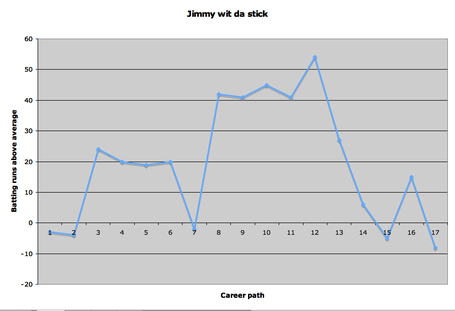 Now let's take a look at is fielding: 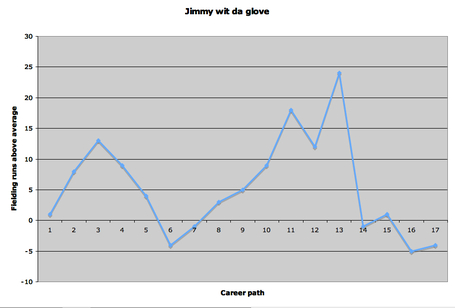 Again, Jimmy's peak in this category was amazing.  In his best 3 years with the glove, from 03-05, he was worth an average of 18 runs with the glove!  Overall, he saved an aggregate 92 runs in his career in comparison to the league average center fielder.  In for those guys who don't like stats, you can't argue with this: 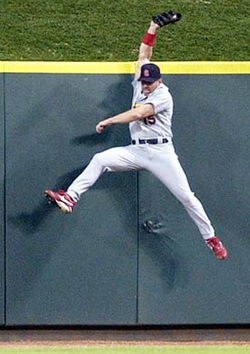 I don't remember what game that was in, maybe someone can enlighten me, but that just looks like an insanely sick play.  (side note: I tried to find a video, but they were all of him with the Cubs, grr...)

Okay, so amazing offense: check.  Physics defying defense: check.  Now lets take a look at the total production that Edmonds offered as a player, including positional and replacement level adjustments and douple play and baserunning scores: 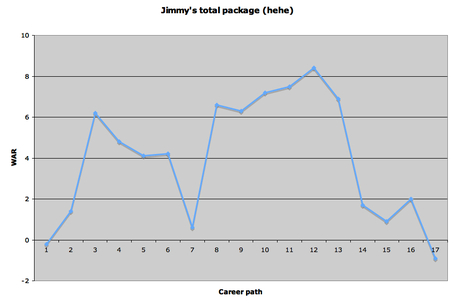 An interesting career graph to say the least.  He was worth over 6 WAR seven times in his career, and had 3 additional seasons in which he was worth at least 4 WAR!  In 11 out of his 16 seasons, he was an allstar caliber player.  Unfortunately, when he wasn't, he was pretty bad.  This graph seperates his final season showing his total value with the Cubs and the Padres, however if you combine those, the he was worth only 1.1 WAR last year.  In fact, in every non-awesome season of Edmonds' career, he has been below average.  Still, his total WAR was a whopping 67.7, which ranks him 38th in the retrosheet era (1955-present), right around guys like Pujols, Ozzie and Larry Walker.

So we can reasonably say that Edmonds was a great player, but how does he stack up to other hall of famers?  To do this, I am going to use the research from BtB author TucsonRoyal.  Basically, he took every hall of famer in Rally's database and figured out a baseline for the average and replacement level hall of famers.  Big thanks.  So here is how Edmonds compares to the rest of the hall: 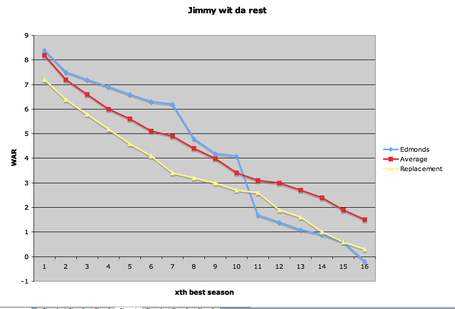 Do you think Edmonds should be in the hall of fame?