We spoke about the offense yesterday, before I was so rudely interrupted by day baseball, and I'm going to be on the road tomorrow, so today seems like a good day for a paean to Mr. Chris Carpenter, who, were there any justice in the baseball world, would be 3-0 with a 0.00 ERA this morning. Here are four observations—I typed operations, first, which would please Freud—on the Cardinals' new old ace:

1. I didn't feel weird while he was throwing the no-hitter because ever since he fell apart I always think of Carpenter like he's midway through a no-no, sitting by himself on one side of the dugout bench. It's an important part of Cardinals fan etiquette: don't talk about how well he's doing.

Don't talk about how he's throwing bullets, or looking healthy, or, should it become relevant, about how he's not given up any hits, because if you do any of those things someone in a position of baseball power might think that the Cardinals are taking Chris Carpenter's health for granted, and then whammo—he suffers a debilitating scalp injury, or is replaced, in spacetime, with Mike Parisi. A no-hitter is the only time this comes up for most pitchers, but for Chris Carpenter yesterday was just Monday.

2. In March I was having a hushed, no-hittery conversation with somebody about Chris Carpenter, and he made an interesting point: "Of course," he said, "the Cardinals can't expect him to be Chris Carpenter even if he's healthy. I mean..." and here he rattled off the litany—his age, his injury history, his spotty career with the Blue Jays, et cetera.

I probably nodded seriously and moved on, both because I don't like to talk about Chris Carpenter and because he had made a perfectly reasonable, perfectly commonsense point that I had never once considered. I've been blogging about baseball for about a hundred blog-years, and in my younger and more vulnerable years I sentenced no shortage of guys in their mid-thirties to premature death sentences. But Chris Carpenter?

It has to do with the way he pitches, I'd imagine. His stuff is superb, of course, but when a pitcher's gaudiest stat is his K:BB ratio and his best pitch is a running fastball that swipe-tags the outsider corner stuff isn't the word you use to describe it. He's just ahead of the hitters, like Maddux was; he can put any pitch on any spot in the strike zone, and on any given pitch he knows the spot he wants. (I'd be remiss if I didn't mention this much-recced fanpost, in which vivaelpujols examines PITCHf/x data to try to quantify Carp's extra something.)

Don't get me wrong—this ages like any other kind of pitching. Eventually his fastball won't slide so perfectly over the edge of the plate, and his curveball will hang more often than it does, just like a guy who throws triple digits will eventually lose a step. But I'd never thought about it that way.

3. According to Baseball Reference—this phrase is analogous to "a blogger mentioned this interesting stat", at this point, but I'll keep citing my source—Chris Carpenter gets 31% of his strikeouts looking, against a league average of 26%, which sounds about right to me.

So it's the bottom of the seventh. You're Casey McGehee, 26, in the first regular playing time of your brief big league career. Your primary concern, to this point, has been getting people to pronounce your name correctly. You're out to bunt over the first baserunner the Brewers have all day, and it doesn't work, and then he gets picked off. So I ask you: what on earth are you supposed to do with pitch #6? 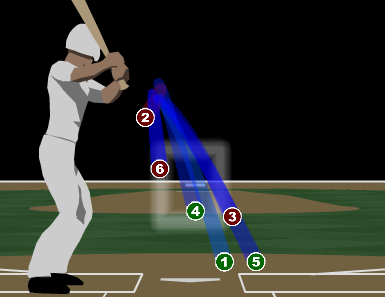 That's an 86 mph slider on a full count. Check your swing, walk back to the dugout.

Alright, baseball powers that be? I'm not taking it for granted. I know how absurd it is that he's 100% Chris Carpenter after appearing in five games in two years. Consider this my anti-jinx offering. I'm not saying that he's throwing a no-hitter, just that—just that people might want to look up at the scoreboard, because something cool is happening.