The first thing to note is that Carp had a good outing yesterday -- 2 innings, no hits (unless you count Lastings Milledge taking one in the side), 3 popups and 3 ground balls. Not too shabby. In all honesty, though, a good outing is one where he throws 19 pitches, has his velocity back, and feels no pain. That he pitched effectively is icing on the cake. It’s so obvious that it’s not even worthy of mention but a healthy and effective Carp for 25+ starts improves our team probably by 3-4 wins. Still, 2 innings in the Grapefruit League is a long way from 25 effective starts but you’ve gotta walk before you can run, right?

As I noted yesterday, I wanted to expand on my analysis of the Cards’ BABIP home/road splits and look to see how we compare w/ the rest of the NL. First, however, I have to critique and correct my own methodology. Yesterday when I looked at the effect that the home/road splits had on our pitching staff, I took the staff’s road BABIP and multiplied that times the number of home ABs in an attempt to see how many additional hits the team would have given up if we had there were no difference between our BABIPs at home and on the road. The problem w/ that was that I wasn’t measuring BABIP – I was simply measuring batting average. What I needed to do was use the formula for calculating BABIP to determine the number of additional hits the staff would’ve given up w/ the higher BABIP. Instead of the 140 hits and 67 runs (and therefore, 6+ wins) I came up with yesterday, the true numbers are 55 hits and 26 runs (roughly 2.5 wins). To me, that sounds more correct than 6.5 wins. Essentially, the fact that we had a lower BABIP at home than on the road was worth 2.5 wins in the standings.

In order to find the new BABIP numbers, I had to determine each team’s staff’s HR/AB, K/ AB, and SF/AB as well as the number of runs the team gave up for every hit at home. All the numbers can be found here. 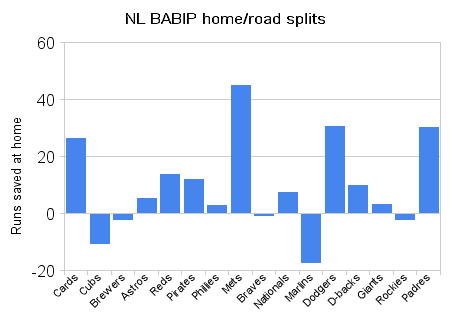 What else stands out here? First of all it’s that 5 teams had higher BABIPs at home than on the road and 2 of them were the Cubs and the Brewers. If they regress to the mean this year, what effect will that have on their win total? Will the Cubs be better by a win or worse by a win? Not sure.

The next thing is that, as I pointed out yesterday, and as Dave Cameron pointed out here we have no idea why this happens. He calls it a home field advantage so that’s what I’m calling it as well. It is, as he points out, a pattern that has emerged and has occurred each year over the last 14 seasons of playing. This is no aberration. Why does it occur? I noticed something as I was looking at the team’s that had the greatest "home field advantage." What do you notice about them – the Mets, Dodgers, Padres, and Cardinals? What I notice is that they all play in home parks that are considered to be pitcher’s parks – parks where we might expect for the home team to have a greater advantage. The table below has the 1 year park factors (per B-R) for each of the 4 teams who had the strongest home field BABIP advantage last year. Under 100 favors pitchers. Above 100 favors hitters.

Though Shea Stadium basically had a neutral effect last season, it’s traditionally known as a pitcher’s park, as the others are. The other 3 played to a pitcher’s advantage last year, though Busch did only slightly. Could the park effect be one of the causes of the stronger home/road splits? I have no idea really. It may be coincidence. As Dave Cameron said in the post linked above, "Isolating a single factor is going to be next to impossible and, in reality, it probably isn’t a single factor." The other question is, of course, how will it affect the Cards this year and, is it predictable?