Share All sharing options for: Home Field Advantage -- Part I

To most of us, the concept of BABIP isn’t new. It’s a measure of a pitcher’s batting average against on balls put in play. The theory is that, once a bat has struck a pitched ball, pitchers have little control with what happens to that ball. They control homers, so they’re removed from the calculation but they have little control over whether a fielder is able to field the ball successfully.

The point is that there’s a lot of luck involved in a pitcher’s BABIP. If a pitcher has an inordinately high BABIP in 1 year, a lot of that can be attributed to bad luck and his ERA will suffer as a result. This is largely the reason that the saber community has developed measures such as DIPS and FIP – to measure a pitcher’s success independent of whether or not a fielder’s able to successfully field the ball.

But BABIP isn’t all luck, as Dave Cameron noted the other day over at fangraphs. We know from experience that lefthanders and flyball pitchers have some BABIP advantages – more flyballs end up as outs than ground balls do – for example. Dave also found, however, that home pitchers have a distinct BABIP advantage over road pitchers – a true home field advantage. In poring over the numbers, he found that the home field BABIP advantage was statistically significant. 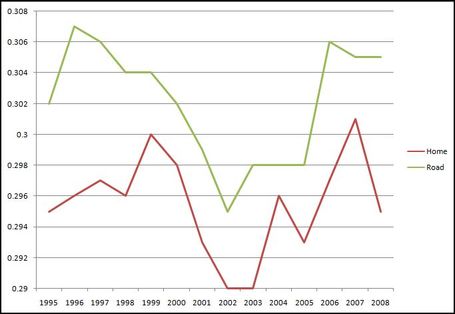 (The graph is taken from Cameron's fangraphs post linked above.)

What we don’t know is why this home field advantage exists. Quoting Cameron:

Isolating a single factor is going to be next to impossible, and in reality, it probably isn’t a single factor. Outfielders learn how to read the ball off the bat in a specific lighting based on repetitive experience. Infielders learn how the grass makes a ball spin at different speeds. Pitchers figure out where the ball carries and where it doesn’t and pitch away from the areas that can hurt them the most. Hitters pick up the ball coming out of the background quicker. GMs acquire players who fit the quirks of their specific ballpark. It could be any of these, none of these, or all of these.
Whatever the reason, it exists and I wanted to look at returning Cards’ pitchers from ’08 and see to what extent it was true for them and what effect it had on our success last year.

Group is how that group overall fared and team is how the entire pitching staff fared in terms of BABIP. Obviously, Boggs’, Perez’s, and probably Thompson’s numbers are affected by small sample sizes. Boggs only had 138 ABs against him last season but we see the splits were much greater for Cards’ pitchers than Cameron witnessed overall. (BTW, Wellemeyer’s BABIP was just .273 last year. That scares me b/c it will likely increase to near the league average – around .290 – which will mean a lot less success this season.)

Overall the Cards were 6 games better (46 wins to 40) at home last year and our pitchers’ ERAs were .29 runs per 9 better at home (4.06 ERA to 4.35). If Cards’ pitchers’ home BABIP had been as high as theirs on the road (.310) it would have meant that they had given up an additional 140 hits at home. Last year the Cards gave up 0.48 runs per hit so those additional 140 hits would have meant an additional 67 runs against. The home/road splits were worth more than 6 wins in the standings. How much better were we at home than on the road? 6 games. The BABIP splits were our home field advantage. (Similarly, of course, had our pitchers had the same BABIP on the road as at home, the Cards would’ve won 92-93 games and would’ve been a playoff team.)

My point isn’t that the Cards were victims of terrible luck last year nor is it that our pitchers were just terrible on the road. The point is that the BABIP home/road splits had a distinct impact on our staff our team last year and likely will this year as well. Of course, they affect all teams. Perhaps tomorrow, I’ll compare the effect that those splits had on each team in the NL. I wonder if they affect each team similarly or if they affect some more than others – and why. Hmmm…..