Who gives a damn if the games don’t count? It’s good to see names in the boxscore and to be able to read about the outcome. It’s just fun. BTW, stupid quote of the day goes to our new 2B, Skip Schumaker, who said this about his boneheaded decisions to dive head first into first base:
Schumaker insists that the dive is faster — because you dive for baseballs, right?
In fairness, it may not actually be Skip’s quote, though that appears to be where Derrick Goold gathered it. Someone please tell Skip you dive for baseballs b/c that’s where the ball is and your glove is on your hand. If he can figure out a way to attach his glove to his foot and run just as fast, it’d make more sense NOT to dive for balls. Until that happens, however, diving for balls and diving head first into first base are two entirely different things. Where’s www.firejoemorgan.com when you need him?

Still, all in all, it was a good day. Skip had 2 hits. Rasmus went 3 for 6 w/ a double and a walk (I count walks in my statements about them reaching base – Rasmus had 2 hits plus a walk in 6 PAs. That’s 3 for 6 in my book). Ankiel was 3 for 4 w/ a double on what Goold called a generous call by the official scorer. Blake Hawksworth and Royce Ring pitched well. Yes, I know it’s just 1 exhibition game but it’s good to have signs of optimism.

In case you haven’t seen it yet, jd is legend has our first power rankings up and he made much of my heresy (or is it blasphemy) at ranking the Cards just 17th – lowest among us all. Apparently the rest of my ranking sucked as well since my average error was the greatest. Maybe it’s just that no one else appreciates the true genius of my rankings. Whatever it is, I really don’t want to be known as the resident pessimist but, in all honesty, I just don’t have a lot of confidence in the Cards’ starting rotation. If they don’t pitch well, we’re going to be in trouble. (I also don’t have a good feeling about Glaus’ ability to stay healthy this year – contract year or not.)

So I wanted to take a look at the division’s starting rotations and their projected WAR. To help me calculate WAR, I used Sky Kalkman’s (of BtB fame) WAR spreadsheet. I used BP’s projected starting rotations from their depth chart page and took the average of the PECOTA and CHONE projections for each pitcher’s ERA and IP. 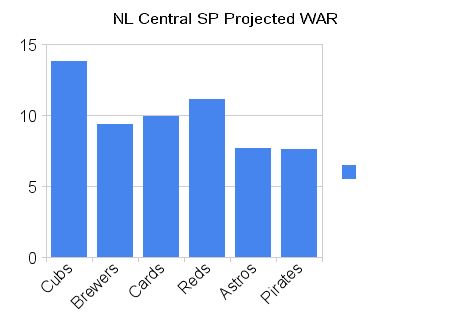 I know my alignment sucks. I'm a graph-posting virgin and the first time never goes the way you hope but I just love Sky's graph of the day collection over at BtB and thought I'd try it out here. Don't worry -- I'll get it right.

BTW, in case you didn't already know -- futureredbirds (and ours) very own erik now has a semi-regular gig over at BtB so stop by and read his stuff. Per his expertise, he'll spend most of his time dealing w/ prospects. Should be good stuff.

The Cubs seem to be head and shoulders ahead of the rest of the division in the starting 5 and the Astros have to thank the heavens above for Roy Oswalt’s 4.1 WAR. When 1 pitcher makes up more than half of your projected WAR, your rotation has problems. Look out for the Reds. If they can field, and their young pitchers continue to pitch well, they could finish 2nd in the division. The Cards, as you see, are middle of the pack in the division – just barely better than the Brewers who’ve made signing aging former Cards a hobby. The entire spreadsheet w/ each pitcher’s projected WAR can be found here.

We could have real problems in the rotation if Carp doesn’t pitch a lot of innings and if Wainwright gets hurt again. Personally, I think Wainwright will be good for 190 or so innings but if we get just 130 or so out of him, we’re in real trouble. I think we’ve seen all the improvement from Lohse, Pineiro, and Wellemeyer we’re going to see. We’ll go as far as the health of Carp and Wainwright will take us. Thank goodness I expect to see our bullpen improved this season