Non-Tendered is the Night

Share All sharing options for: Non-Tendered is the Night

NON-TENDERED IS THE NIGHT

A VIVA EL BIRDOS PLAY IN ONE ACT
CHARACTERS
ANTHONY REYES, ex-Cardinal, ex-Indian
CHARON, or at least a man with a boat
SOME FELLOW TRAVELERS, washed up on the shores of this same strange place
???, a mysterious liaison between the worlds hither and beyond
DAVE DUNCAN, a prospective hauntee
SCENE
At some point the place Anthony Reyes stands may indeed have been the afterlife—certainly it has all the trappings. The lighting, punctuated by the sensible desk-lamps that stand atop each of thousands of desks, arranged on a grid, occasionally reaches eerie; someone, every so often, moans and wails. These were once the moans and wails of the damned.
But it is non-tender season, and until it is time for the afterlife to renegotiate its contract with Major League Baseball a loophole has allowed it to become crowded with souls in limbo on the night after baseball's non-tender deadline. One such soul is ANTHONY REYES—he stands at one end of an unattractive little stream, playing with the bill of his cap, watching the office workers of the damned as they deal efficiently with a flood of new paperwork. Finally a boat reaches his side—a man, who is very obviously working overtime, waves him hastily on.
CHARON: Mr.—Mr. Reyes, then?
REYES: Yes, that's me.
CHARON: I apologize for the delay, I had Jack Cust in here and he fell off the side. I'm kidding, but he almost did. But that's my joke.

REYES: Where am I?

CHARON: Right now it's an open question, but you're in the process of being in hell. Don't worry about the connotations, we're doing contract work. You weren't tendered a contract. What's the last thing you remember?

REYES: Well, we'd just beaten the Tigers, and I'm explaining to this reporter that don't really iron my cap, and... I don't know, the rest of it's a blur.

CHARON: It's from Seinfeld, it's a joke—look, I'm sorry—it's a TV show—I'm sorry. I'm just a little nervous having to make small-talk. It's not what I normally do. In between 2006 and 2009 you've been sent to the minors ten or fifteen times, traded to the Indians for a guy who was later handed off to the Padres in exchange for their vague interest, had six pretty good starts in 2008, and undergone a serious elbow surgery.

REYES: I thought I felt a little sore.

CHARON: I have another joke, where I'm like, "I ferry you across, but not your fastball," because it's funny and then it's spooky, you know? But I thought maybe that would be too close to home. Anyway, we're here, thank goodness. I've got Garrett Atkins on the other side. You think the Cardinals'll go after him? He can't play defense, but he hit for that year or so.

REYES: You're saying they let the guy they traded me for go in the Rule 5 draft?

CHARON: That's what it says on your chart.

REYES: Yeah, I hope they do.

REYES is deposited in the main office floor of hell, where he is seated by the secretary of hell in the waiting room of hell. SOME FELLOW TRAVELERS, each with a numbered ticket in hand, are sitting in his row.

CUST: Is he still telling that joke? Yeah, I am.

REYES: Why are you here?

CUST: Well, I can hit a fastball as well as anybody you've ever seen, and I'll hit it 400 feet to any part of the field. But they don't throw me any fastballs. And I can't play defense. If you were a team with a hole in left field, and you had a young right-handed hitter to platoon with me, and a fleet-footed fifth outfielder—no, probably not. To be honest. But I'll DH somewhere. Anyway, I'm here so that they can tell me which Greek philosophical allegory best represents the whole fastball hitter/no fastballs thing. I can see you're here representing an NL team, so I'll stop talking now.

CUST stumbles out of frame. Across from REYES are several pitchers, most with one or both arms in slings, as precautionary measure. REYES feels a particular and immediate bond with CHIEN-MING WANG, a late twentysomething non-tender with serious arm problems.

REYES: I think we have a lot in common, you and I. We both had some great moments and some bad ones. We were both dumped pretty unceremoniously by a team that had spent a while waiting for our big breakout. I'll tell you, if I had your sinker and you had my change-up we might not be in this mess right now, you know?

CUST: Excuse me—I'm sorry to interrupt, but I speak a little Mandarin... Wang agrees with you, for the most part.  He's worried about his shoulder, but he thinks either of you would make a fine pick-up for a team with low expectations and a full but marginally unsettled rotation. There's also Scott Olsen, he notes, but he's rumored to be a headcase, and injured besides; he's lost even more velocity than you did last year. And he likes your cap; do you iron it?

CUST: Sorry, that's my number coming up. It was nice talking to you. (他絕對是整燙.) You should talk to those guys over there—it looks like they've already received their allegorical judgment. [Down the hall behind CUST walk a reliever in black and a reliever in white. They are holding a pair of new-looking scripts.]

MACDOUGAL: "I am the Spirit of Nibbling—and the, and not enough contact! I am alpha!"

CAPPS: "I am the Spirit of Going After Hitters—and too much contact! I am omega!"

MACDOUGAL and CAPPS: "If we were one pitcher, getting groundballs and going after hitters, we would be your ideal pitcher. Now we are... Now we are..." [CAPPS, his head down, runs into REYES.]

Suddenly the last three years snap into focus for ANTHONY REYES. La Russa and DAVE DUNCAN's unimpressive record with young pitchers sharpens in his mind. A sinker, a horrible sinker, plays across the memory of his arm's tortured muscles. He bursts through the door to find DUNCAN's face projected onto white drywall, and — 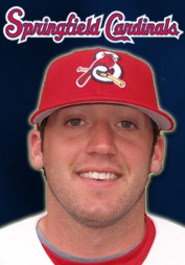 Hey man, I knew you'd find us eventually. In hell! I got a winter job here.

REYES: Oh, no! The Ghost of Chris Lambert!

DUNCAN: Oh, for god's sake, is this a party line? Reyes, did this clown bring you here?

LAMBERT: This ghost clown! Liaison between hither and beyond! Licensed astral-projector operator!

REYES: You, Dave Duncan. You're the reason I'm here, aren't you? I remember it all now. I destroyed the minor leagues, I did pretty well in the major leagues, but that wasn't enough, was it? I had a K:BB ratio over seven one year! In the PCL!

DUNCAN: That seems like you're oversimplifying things a bit. After all, your velocity was pretty consistent both years, wasn't it? And you're—well, your arm hasn't exactly held up in the meantime. Look, Reyes, I like you—

LAMBERT: Man, you were just telling me about how stupid that stupid ironed cap looked—

DUNCAN: Look, Reyes. I like you more than I like this guy. And I'm biased, obviously. But as wrong a turn as we might have done you, this whole thing might have been a confluence of you struggling to adapt to the majors at the same time your elbow slowly came unglued. See what happens this year, or next year. There's still plenty of time to be Al Leiter, or somebody.

REYES: I guess you might be right. But Luis Perdomo? Was that the best Mozeliak could do? I'm a fun guy to watch! I have an interesting wind-up, cool socks, an awesome hat. All I want now is a make-good contract. Give me a Matt Clement deal and see what happens, you know?

DUNCAN: Lambert, can you get Mozeliak on this thing?

REYES: Okay, you know what? It's not worth it. I'm going somewhere else.