I just saw "Men who Stare at Goats" last night.  Weirdest movie ever.  I laughed my ass off throughout the thing, but damned if I knew what it was actually about.  Accordingly, I got home late last night, so I don't have time for a full post, but I have a couple of things that I wanted to link to that I thought you'd all enjoy.

We'll start off with a very cool modification of WAR from Alex Krolewski at Beyond the Boxscore, called PZR Win Values.  Before you read that, let me give you a brief history of what WAR actually is.  The AR part of WAR stands for Above Replacement, and generally represents some minor league scrub who each team has.  Think guys like Brad Thompson or Blake Hawksworth.  You would expect such a player to put up an ERA of over 5 if he was in the rotation.

The W part stands for Wins, and it represents how much production over that replacement level player you can expect from a given player.  Wins are calculated mathematically (you can read the
gory math details here), and are devoid of context (pitching to the score doesn't get you any cookie points).  They can be calculated using a plehtora of run estimators:

ERA... you should probably know this one.

FIP... attempts to take out some of the aspects of ERA that are much less under a pitchers control, such as defense and timing.  It relies on home runs, walks and strikeouts to rate pitchers.  Despite it's simplicity, or maybe because of it, it is the most used defense independent pitching stat out there.  Kincaid, over at 3-D Baseball recently wrote a two part series further explaining how it works, that I encourage you all to read.

tRA... is like FIP on crack, in a good way.  It includes the basic elements of FIP, but also adds a pitchers batted ball numbers to give them more credit for inducing weaker contact.

There are others, but those are the main three.  You can see problems with each of them however.  ERA is too reliant on things that are mainly out of a pitchers control, like defense, and thus doesn't measure pitcher skill very well.  FIP and tRA eliminate defense, but also timing, which can be a problem.  A pitcher who gives up a walk then a home run, is just as valuable by these estimates as a pitcher who gives up a home run followed by a walk.

Enter PZR.  PZR is a modification of of UZR, which is a stat developed by Mitchel Lichtman, a former consultant to the St. Louis Cardinals, to credit fielders with their defensive contributions on balls in play.  UZR takes many, many parameters into account including how hard the ball is hit, the batted ball tendencies of the pitcher on the mound, the location of each batted ball and many others.  You can read more about it here and here.

Anyway, PZR takes UZR inputs and applies them to pitchers instead.  So instead of measuring feilding prowess, it measures how hard to field each pitches balls in play are.  Once you get those numbers, you can adjust each pitchers ERA accordingly.  That makes an adjustment for defense, while not taking out the timing aspect of pitching.  If you use PZR modified ERA to calculate WAR, you get some very interesting results, as Alex demonstrated in the link above.

If anyone has any questions about PZR or WAR, speak up, and I'm sure we'll be able to help.


Next, the Pittsburgh Pirates (I know, don't laugh, they're not that bad) are looking for a programmer/analyst to help their front office with front office stuff.  If you have skills in SQL and other computery stuff, you should check out this link and see if you are interested in the job.  Also, it's probably good if you live in Pittsburgh.

Next up, at the Hardball Times, Max Marchi looks at the best and worst bad ball hitters and pitchers in baseball.  Using Pitch f/x data, he looked at which hitters swung at the highest percentage of pitches seen in the bad ball zone, and then which are most and least successful at hitting those pitches when they swing at them.  He repeats the study for pitchers as well.

Suprisingly, no Cardinals show up in any of the leader boards, but using a variation of Max's method, I present to you the most hackiest Cardinals this year.  I say variation, because I wasn't able to reproduce the code he wrote that figured out the bad ball zone based off of where pitches are called strikes.  Instead, I simply looked at pitches that were at least a half a foot off the strike zone for each batter hand.  Anyway, here are the Cardinal leaders this year, with a minimum of 200 pitches seen in the bad ball zone:

*with Oakland and Stl.

League average is around 11%, so the Cardinals don't seem to be so bad.  Unfortunately, Pitch f/x data doesn't include which team each player is on, so there is no way to definitely check out which teams are the best and the worst.  Here are the full leaderboards, bearing in mind that my method is extremely crude.

I discovered a small error in my query that screwed everything up for lefties, so you'll see that the leaderboards and the spreadsheet have been updated with the correct numbers.  In case you missed it, I had Ankiel only swinging at 2 bad balls all year.  Just for fun, here is Ankiel's swing plot this year: 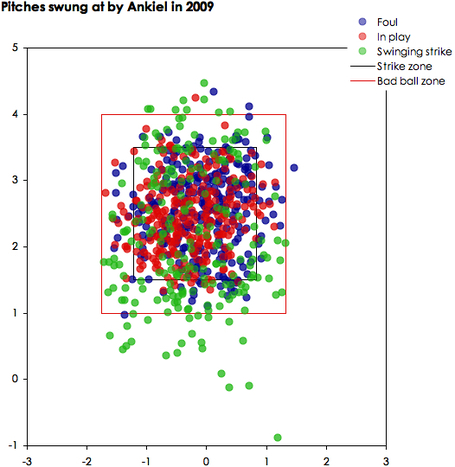 He should really get someone to help him with those low pitches.