Wandy.  Despite being fruity and somewhat hilarious when uttered (especially if say it like "w-and-y" , that name has brought much anger and exclamations of, "f'ing gdm!" to game threads around VEB.  The primary reason for that is how much he has dominated Albert Pujols over his career.  Using the invaluable Baseball Reference, we can see that Pujols is just 5 for 31 against Wandy, with 2 doubles, 6 walks and a .523 OPS.  Interestingly enough, he's only struck out once.

Fortunately, a large portion of Pujols' plate appearances vs. Wandy have come in the past 3 years.  That means we get a chance to explore the matchup more in depth using Pitch f/x data.  Overall, there were 96 pitches with full pitch f/x information on them, which isn't much, but probably enough to see some interesting results.

First, let's look at how Wandy's been approaching Pujols: 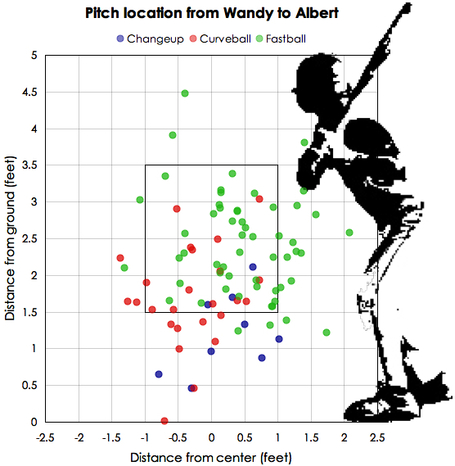 Despite the small amount of pitches, we can see a pretty distinct pattern of how he's been attacking him.  Lot's of curveballs down and in, fastballs on the outer half, and changeups down and away.

Now, let's check out what Albert's been doing with those pitches: 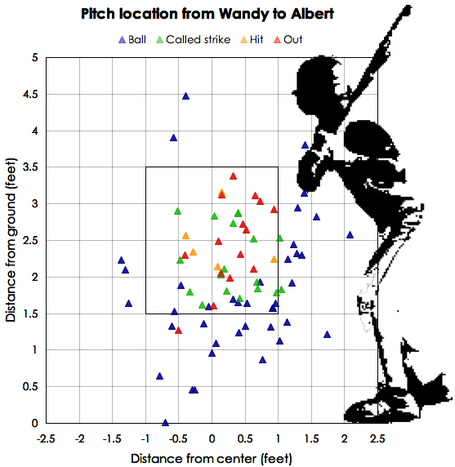 There are a few interesting things to notice from this chart.  One is that he has not had a swinging strike against Wandy in the 97 pitches between them capture by Pitch f/x.  Even with Pujols' amazing contact ability, that's very surprising given that Wandy is one of the better strikeout pitchers in the league.  When you consider how much Pujols has struggled vs. Wandy, it's interesting that none of that is related to him being overpowered.

Another thing to notice is the inconsistency of the strike zone at the bottom end.  There are at least 5 pitches called strikes that are in the same exact location as pitches that were called balls.  That effect seems to be favoring Pujols actually, as he's gotten a lot of close pitches to go his way.  Also, most of his outs are on fastballs on the high outer half.  Unsurprisingly, most of those are fly ball or pop outs.

I would dig deeper, but there is really only so much you can do with 96 pitches.  Really, the main reason Pujols has struggled against Wandy is that he hasn't been squaring him up much.  He's only hit 9% line drives against Wandy compared to over 20% against all other players.  That's manifested itself in very few hits, and thus lower production.

However, Pujols has still shown a great eye and contact ability, so there is no reason to think that Wandy really has his number.  Expect El Hombre to hit much better against Wandy in the future.