The good and the bad of Ryan Franklin

Share All sharing options for: The good and the bad of Ryan Franklin

This year Ryan Franklin was an enigma. Thanks to a nifty .269 BABIP (compared to a league average of .300) and an 85.7 strand rate (compared to a league average of 70%), his production was far better than you would expect based off of his peripheral statistics. His ERA was excellent at 1.92; however, his FIP was a good, not great, 3.31. And due to a super low HR/FB ratio, his xFIP was even higher, at 4.23. Simply put, his career year wasn't so great when you adjust for luck.

What makes that worse is that he seemingly fell apart down the stretch. His low BB rate rose, his low K rate plummeted and his low BABIP got a little bit less low. During that time, he had regressed the pitcher he once was. His command was worse, his stuff was not biting as much as it usually did and his goatee had finally completely taken over his face. Obviously, that's what happened... or was it?

I have a theory that Franklin actually didn't pitch much differently than he usually did, it's just his luck and timing were different. I'll be honest, this is part of a larger study I'm working on, so I'm using you guys as guinea pigs, but I'll think you'll enjoy it nonetheless

What I did was take all of Franklin's appearances this year (65 including post season and all star game), and sort by wOBA allowed. I took the 15 worst outings and the 15 best outings from him all year, at least as measured by wOBA, and pulled the aggregate PItch f/x data for each group. I then took the two groups and looked at several attributes of the pitches, to see if I could spot any differences. For fun, when I show you the graphs and data, I won't label them, so you could try to figure out which is which. 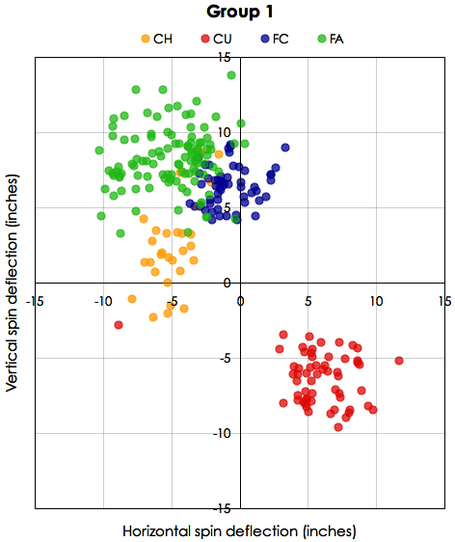 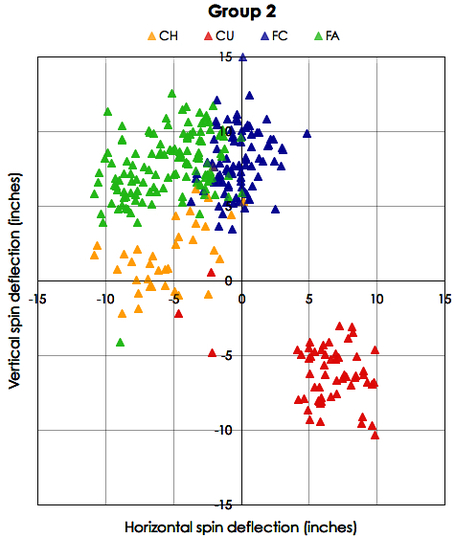 Based on his stuff (or at least his movement) can you tell which one was the bad Franklin and which one was the good? Well, you're guess is as good as mine (actually I know the answer because I'm just awesome like that). As far as stuff and pitch selection goes, there is not much separation between the two groups. The only noticeable differences is that he threw more changeups in group 2 and his cutters had a bit more drop in group 1.

Now, let's take a look at how he located the ball. First, we'll check out his pitch location to lefties, grouped by pitch type: 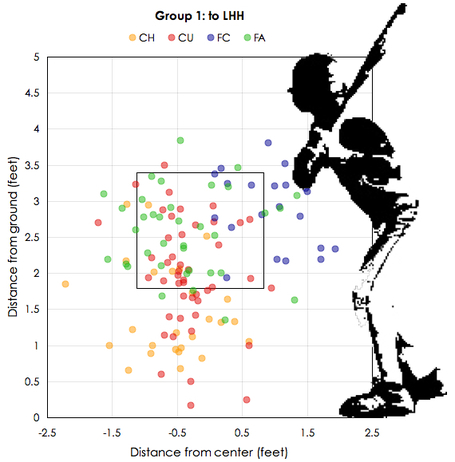 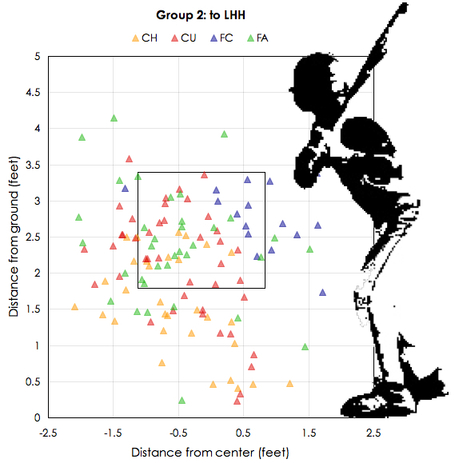 The images are a little bit small, but you can click them for a larger image. Against left handers in group 1 he threw a lot of pitchers on the out half of the plate, as well as lot's of offspeed pitches just below the plate. He also rarely went inside on the batter. Group 2 on the other hand, looks a little more spattered, although he was able to locate the cutter on the inner half of the strike zone more consistently than in Group 1. 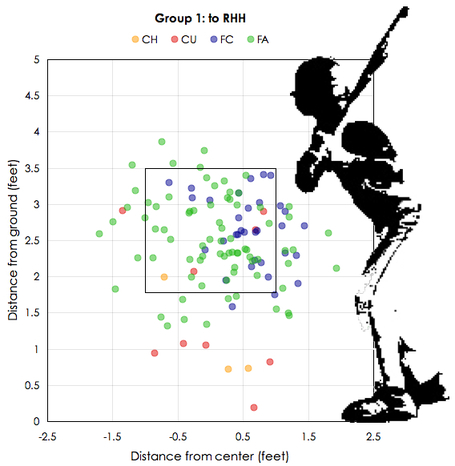 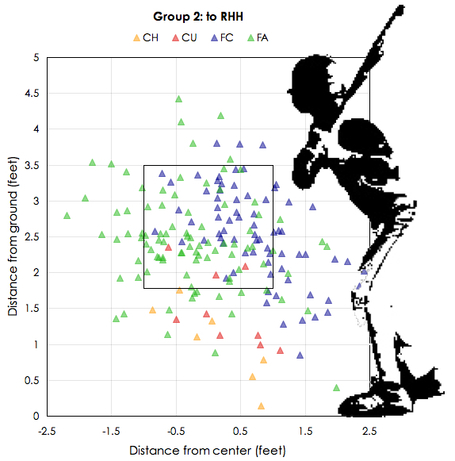 This time group 2 looks a little bit better, at least in my opinion. There are more cutters on the inner half, and more offspeed pitches down. Although, the distributions are very similar indeed.

So what do you guys think? If you would like more non-performance information, just ask me in the comments section and I'll be happy to provide it for you. I've set up a poll. The guys who guess right will be given 5 internet dollars, while the guys who guess wrong will be killed... sorry, that's just how it works around these parts.

At any rate, my conjecture seems to have been validated. Based on those two pieces of non-performance information, stuff and location, it's very hard to tell which is the good and the bad Franklin. This makes me very skeptical of managers or coaches who profess to be able to "identify" the problem with a certain player when he is in a slump. Obviously, in some cases when an injury or something else is present, you can tell based off of how he looked (I did exactly that with Lohse a while back). However, in most slumps, random variation and luck are the most likely causes.