For those awaiting the exciting conclusion to "The Untradable", you'll have to wait a little longer.  I'm having trouble organizing all of the data into something presentable, and I'd like to take a little longer to get it right.  In the meantime, let's take a look at everyone's favorite Rick Ankiel buffer, Colby Rasmus.

His first year in the majors had a lot of positives.  He played exceptional defense in center field, hit for power, and had like 20 walkoff home runs.  In less than a full seasons worth of play, 520 plate apperances, he was an above average player according to FanGraphs' Win Values.  However, it wasn't all sunshine and roses.  As a player who showed exceptional plate discipline throughout the minors, walking in 11.6% of his plate appearances, he showed a disappointingly hacktastic approach in the majors last year, walking just 7.1% of the time.  Even more disturbing is that this may have been intentional.  From D. Gould:

Rasmus said he’s supposed to think swing, not walk. He asked rhetorically, Isn’t that what people talk about? Isn’t the benefit of batting in front of Pujols seeing strikes? "I don’t like walking," Rasmus said. "I’m trying to hit."

It seems as though Rasmus decided that, due to the fact he was hitting in front of Pujols, he wanted to swing more often than not.  That line of reasoning makes sense only if two things are happening.  1) Hitting in front of Pujols actually manifests itself in more hittable pitchers and 2) If you can make sure that you only swing at those hittable pitches.  Swinging a lot is fine if you are getting pitches to hit; however, if you are reaching, then it is a bad thing.

Let's take a look to see whether or not Rasmus actually did those two things last year.  First, via Pitch f/x data here are the locations of each pitch that Rasmus swung at and those that he has taken: 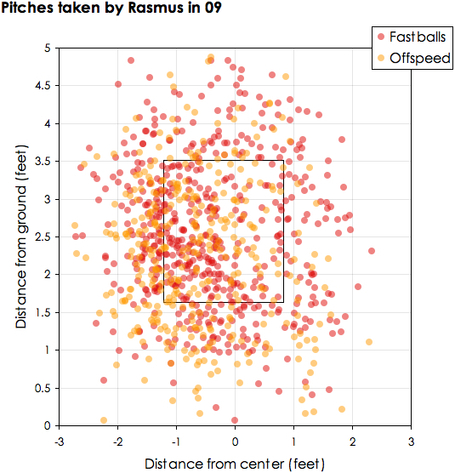 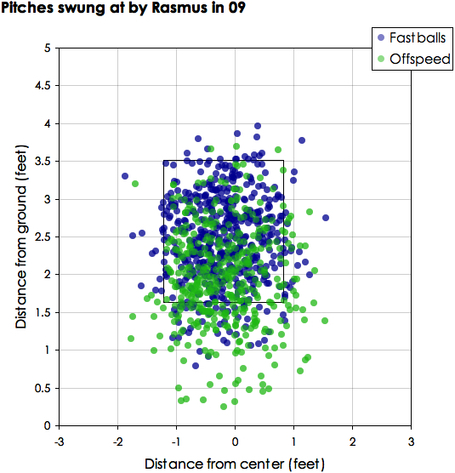 This is from the catchers point of view.

As you can see, he swings a lot of pitches down and out of the strike zone, most of them being offspeed (duh); however, his eye across the plate seems to be good.  He also has a big cluster of "takes" down and away, which makes sense, and very few over the heart of the plate, which also makes sense.

All number from FanGraphs

So, it appears that Rasmus is doing a pretty good job, at least in terms of taking advantage of hitting in front of Pujols.  It would be good to cut down on the O-Swing a little bit, but you could say that about any player, and Rasmus' mark in that category is decent.  He has swung at a lot more pitches than the average player, 50.1% to 45.2%; however, he's been swinging at strikes, so it isn't as much of a problem.

What is a problem was that he wasn't getting great wood on those pitches inside of the strike zone.  His contact in the strike zone was within .1 percent of the league average mark; however, his slugging on that in zone contact was below average.  His BABIP was .283, which is very low for a player with Rasmus' speed and LD hitting ability; however, even assuming a league average BABIP, his bat wouldn't have carried enough umph in it to make this approach work.

Basically, you have to play to your strengths.  If Rasmus can continue to develop his power, than swinging at a lot of strikes might work as he would make up for the lower walks with a high slugging.  However, if his power remains about average, then he needs to take some more pitches in order to get on base more to compensate.  Either way, Tony needs to not bat him in front of Pujols, so he doesn't feel pressured to swing more than he should.

(PS: I had to finish this early in the morning, so sorry for any typos)