Ashes to Ashes, Grit to Grit

Share All sharing options for: Ashes to Ashes, Grit to Grit 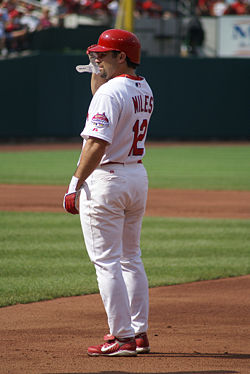 I was all set to wax... well, if not rhapsodic, at least gently dismissive about Aaron Miles. Utility infielders are easy to like. They don't get paid much, relatively speaking, they'll play anywhere, they come out when the chips are down and the star's hurt, and they look more like us—they're not as athletic, they're shorter, they can't do anything the chicks dig. It's fun to watch these normal people play a game that seems so distant at its superhuman edges. Super Joe, Bo Hart—I've been a fan of plenty of utility infielders before, and I'm sure I will be again. But he had to go and play the under-appreciated card.

"I'm excited to be a Cubbie," Miles told Chicago Cub beat writers on a conference call this afternoon. "Being a Cardinal was great and that part is over now. Now I'm ready to be a Cubbie and play the game the right way and show St. Louis that they let somebody go that maybe they shouldn't have."

I understand the need for self-affirmation in stuff like this. You've got to think you're the best; you have to think that you are vitally important, completely in charge. That's part of doing a very difficult job. So this isn't, of course, about Aaron Miles the person. But Aaron Miles the ballplayer is a utility infielder who can't play shortstop and a second baseman who can't hit enough to start. The Cardinals couldn't find $4 million to pay Russ Springer, their best relief pitcher two years running. Two years and $5 million for a seriously limited backup infielder—even one who, at times, last year, seemed like he might be their second-best relief pitcher—would be ridiculous.

The kind of teeth-gnashing going on around the internet is outsized but understandable; if he really is the conduit through which people identify with the Cardinals, or something like that, it makes sense. But on a purely baseball level, losing Aaron Miles is not going to break this club. That's why they got him as ballast in the unforgettable Larry Bigbie/Ray King trade; that's why they non-tendered him twice, as Miles himself pointed out. He hasn't played 130 games for the Cardinals all three years because he was helping the team, he did because nobody else was.

The forces that dictated that Moz not keep Miles around after his fluky 2008 are the same ones that brought him here in place of Abraham Nuñez in the first place. Utility infielders have to be cheap just as much as they have to be good. Miles was not cheap anymore, and luckily for him the Cubs have had too much luck with scrappy infielders over the past few years to discriminate about it. But Aaron Miles has priced himself out of his job, like so many utility infielders before him; now it's time for Brian Barden or Tyler Greene or Joe Thurston to benefit from it like he once did.

Joe Thurston will make a fine Aaron Miles. He hustles like crazy, he's stuck around in the minors with cloudy big league prospects for years For Love of the Game, and to top it all off he can't really play shortstop. He's even got 68 minor league triples—he's like Aaron Miles with a side of Whiteyball. I think it'll be the beginning of a beautiful friendship.