Not that I expect all of you to be, at this very moment, in line for $300 laptops and 32 inch Pyongyang-branded plasma TVs, but I get the feeling that traffic might be pretty light today. With that in mind—that and the knowledge that when we acquire either Trever Miller or Arthur Rhodes you won't need an RSS feed to alert you because something in your heart will just feel right that's never really felt right before—this is something of a stop-gap post as we drift back into reality and Viva El Birdos's more typical pattern.

So let's talk about shortstops. Not the free agents—there'll be plenty of time for that—but the ones who are dictating that the Cardinals acquire a free agent shortstop, and how long they commit. Here are your options: 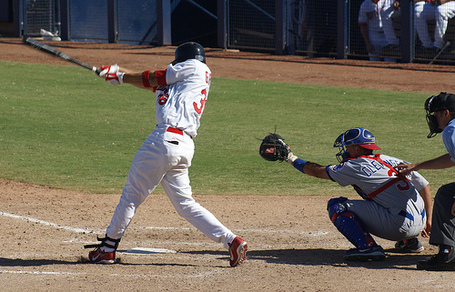 CLOSE TO THE MAJORS, FAR FROM PREDICTABLE

Here, rapidly approaching the major leagues, you have the kind of players whose eventual ascent to the bigs will be borne more of necessity than desire. Tyler Greene (above, courtesy momup), at the rate he's going now, will end up with major league playing time not because La Russa can't wait to play him but because he has no place else to go. You've measured free agent shortstops against replacement players before; well, meet the replacement players.

Back when he was drafted Greene's reputation was not all that unlike Peter Kozma's; he was, we were told, a defense-first shortstop whose bat might struggle to adjust at the upper levels. It was true, but it failed to take into account the awesome way in which his bat has not adjusted at the upper levels.Because Tyler Greene is the single coolest maladjusted defense-first shortstop of all time.

It's like this: most of the time, social disfunction produces marginal characters who exist on society's outskirts and express its disaffection and anxiety through crime and decay. You get gangs and car thieves and muggers. But occasionally, those same forces come together and produce the Fonz, an avatar of both social distrust and how cool reading is, of counterculture and being respectful to your friends' parents.

Tyler Greene is the Fonz of failing to adjust to major league pitching.

This is not your father's failure to adjust, the overpowered-by-real-pitchers .250/.300/.300 line that all would-be David Ecksteins produce when pressed into service as utility infielders. This is the bad Richie Sexson playing shortstop.

In what amounts to a full season of AA ball, cut in half by a serious knee injury in 2007, Greene hit 24 home runs, stole 24 bases, struck out 161 times, and managed 38 walks. I haven't gotten to see him live, yet, but sometimes I get the feeling that his approach at the plate is akin to when a pitcher who has a lot of power goes up there once or twice a start and just swings as hard as he can three times.

After Brett Wallace finally started hitting as expected Greene replaced him as the designated Arizona Fall League surprise. He hit .287/.380/.506, his three homers and two triples seeming to encapsulate everything he can do pretty nicely. The problem is that in 87 at-bats packed with so many optimistic indicators he still managed to strike out 29 times.

Striking out in a third of your at-bats makes predicting major league success pretty difficult, but depending on how the Cardinals' internal metrics and scouts see his defense come Spring Training I wouldn't be stunned if he earned some real MLB playing time at short, should the Cardinals fail to land a Name. .220/.280/.370 seems just about unbearable until you start a guy who slugs .309 over an entire season.

And most importantly of all, he would fail awesomely.

FAR FROM THE MAJORS, OUR MINDS: PETE KOZMA

Even with the top-ten prospect lists looming large Kozma seems to have drifted out of our collective conscience, which is somewhat ominous since he did almost exactly what was expected of him headed into this year.

The rule-provingly rare polished, medium-upside high schooler, Kozma spent most of his year in low-A Quad Cities—a small victory—and showed off what has always been described as a broad-based skill-set. His perfectly decent .284/.363/.398 line is the result of a hot start, a terrible slump, and a nice finish that led him to an ugly month in high-A. He walks a lot, he doesn't strike out too much, he plays shortstop well, he hits for a little power, and since he was 20 and spent his year in a pitcher's league where he was a little young he gives you just enough to wish on. He is the rare player who is commended with faint praise, a rousing chorus of it from all directions.

I wasn't (and am still not) a fan of the Kozma pick, but I think he is—mildly, in true Kozma fashion—underrated heading into this year, especially when the free agent market leads us to look at our future options. His performance screams college-player-not-dominating-the-low-minors, even though he was a high schooler; since he's so well-adjusted there's nothing to What-If about. But if he were to regress from 2008 he would still be spending all of his age-21 season putting up average numbers in another pitcher's league. (Greene was 21 when he was drafted, and put up marginal, surprisingly punchless numbers in short season ball and high-A.) He's got a few years before being just passable is a death knell.

Combined with Nico Vasquez, a toolsier but less predictable alternative who will ideally be chasing him up the ranks, Kozma should give us some hope that this time in 2010, when the Cardinals are either hoping that someone signs Edgar Renteria before the arb deadline so they get some draft picks or that Tyler Greene's .211/.233/.580 line doesn't price him out of their range, they won't be spending another few years on the Middle Infield Free Agent Carousel.

So if there are people out there today—perhaps on their iPhones, while in line at Best Buy for another iPhone—here is your prompt: the Cardinals' internal middle infield options, today (literally) and tomorrow (figuratively.) Discuss.

(Or you can just talk about what you ate yesterday.)