Hail, hail, the conquering heroes. I can honestly that I've never been more excited for a team that's not Our Guys. It's a shame that the Rays-Phillies matchup, in which two of the most snakebitten teams in baseball—filled, now, with exciting young players who've never been here before—are looking to reverse their fortunes completely, is going to be a ratings disaster. It should say something to Major League Baseball, particularly whoever's in control of the advertising budget and the national TV schedule, that they can't market these teams.

Meanwhile, every newspaper in America is beginning articles with the same lede: "Could we get Jake Peavy? Well, yes, but..." It's like an internet meme for sports pages, and I wouldn't be surprised if they're running hypothetical trades in Japan, or setting up lemonade stands to pay for his contract in Frontier League cities.

But the Cardinals are in the thick of it; we're the team that gets mentioned in other cities' Hot Stove talk. Before we get any further I think we need to consider, a little more seriously, the man the Cardinals would be giving up in any Peavy deal. That's right: whither Colby Rasmus? I hate to sound too much like Real Ultimate Power, speaking of internet memes (although the purpose of Colby Rasmus is to flip out and hit home runs), but there are some facts to keep in mind when discussing any Rasmus-Peavy trade.

FACT ONE: Colby Rasmus will be 22 next year. That's really young, even when measured in Pujols years. He will also be free, as far as baseball players go. Were the Cardinals to acquire Peavy the team that would be spending something like $42 million on three pitchers by 2011. If they've traded Rasmus, Jess Todd, and Jason Motte—let's say that's the deal—where are they coming up with the money to pay their replacements? This is part of the Peavy-centric argument detailed in chuck's last post, and I can't improve on it.

FACT TWO: Colby Rasmus hit 29 home runs in AA as a 20 year-old. It's easy to forget, since we spent so long waiting for him to get started in the PCL last year, but the reason we were waiting in the first place was that Rasmus put up an isolated power of .276 in AA at an age where most college draftees are looking forward to getting their start in short-season ball. He went 18 of 21 stealing bases, while he was at it, and threw 11 baserunners out when the rules of baseball prevented him from playing offense.

This isn't damaged goods, or a player you take a flier on. This is a guy who put up a .742 OPS while young for his league and got hurt after a month where his on-base percentage was .441. He's a guy who could have beaten the pulp out of the Texas League for another year without anyone worrying about his age, because he's the same age as Brett Wallace. So I'm not concerned about his performance in Memphis last year, and I doubt the Cardinals are, either.

FACT THREE: Colby Rasmus is all those other prospects you wish the Cardinals had. Like a lot of people, I'm on the Brandon Wood bandwagon. I think he's undervalued by his team, major league ready, and set to provide above-average offense at a premium defensive position. It's hard to think about our team's prospects with the same can't-miss attitude I ascribe to other teams' players, but I think that's the same feeling you'd get about Colby Rasmus from a Padres fan. If Rasmus were the undervalued center fielder on the Yankees or the Padres I feel like I'd be painting icons with ornate halos surrounding all his batheads.

He's really good; I don't know what else to say. If you have four solid young outfielders, or five, or eight, he's not the one you trade.

Meanwhile, long-time GUB photographer Dan's Mom is in Arizona for the week and sent me some photos of the Cardinals' Fall League players. (Obsessing over Cardinals prospects is a family business.)

Shane Robinson and Our Man the Walrus starred at the first game she went to. Both players look like caricatures of their reputations; Wallace is a linebacker, and Robinson looks like they didn't have a batting helmet or baseball pants in his size. (I asked her to do a little scouting and she was most impressed by Robinson's outfield arm, so I guess looks can be deceiving.) Photos after the jump; more to come, I'm assured. 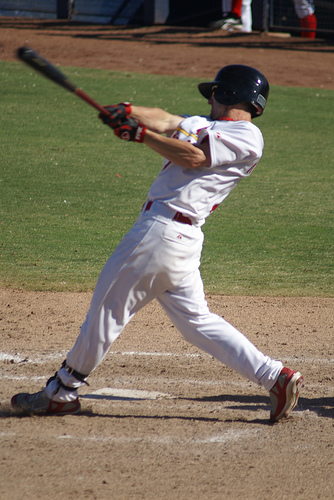 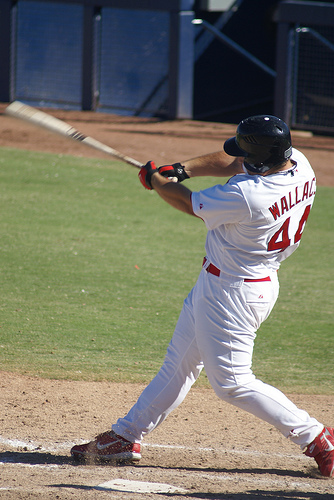 They're like the big cartoon dog and the little jumping dog that keeps saying "Let me yattem!"